...these are the cupcakes Geoff mentioned earlier. 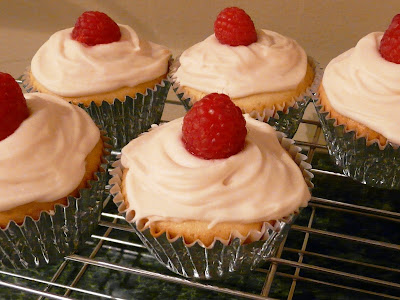 Edit: For those who would like it, I am adding the recipe info below. Most of my baking involves combining and modifying recipes, so I'll give you the recipes I used as a jumping-off point and then list the changes I made. And also, my friend Rebecca assisted with the making (and enjoying) of these cupcakes. :)

My favorite lemon curd recipe happens also to have been used in the recipe that was my inspiration for this project, found here. This recipe makes a ton of lemon curd (my favorite part), so cut it in half if you don't want to deal with the leftovers.

For the cupcakes, we used the recipe found here, but cut the sugar in half. We also used the cream cheese frosting recipe that's listed there, but with way less powdered sugar and the addition of a few spoonfuls of seedless raspberry preserves (next time I think I'd skip the preserves). And I tinted the frosting pink with a couple drops of red gel food coloring. This recipe also shows the cone method I use to fill cupcakes, although I don't do it quite as tidily, and I tend to scoop out a bit extra so there's room for lots of filling.

You'll also need 48 raspberries (two per cupcake) - I smooshed one inside the cupcake with the lemon curd and stuck one on top. That's more than are in one of those little raspberry containers, so I got a big container and just ate the rest of the berries with yogurt.
Posted by The Adventures of Scarlett and Melly at 6:31 PM

I'm slightly obsessed with cupcakes :) My coworkers get to try new ones every week - I've successfully managed to sabotage every single New Year's Resolution diet in the office.

These ones have lemon curd and a raspberry inside, and that's raspberry cream cheese frosting. The best part of all is that I have an entire bowl of leftover lemon curd - YUM!

Natalie, have you ever checked out:
http://notsohumblepie.blogspot.com/

Oh my gosh, she has such great recipes. Your cupcakes look scrumptious!

I haven't seen that one - thanks for sharing!

Cupcakes! Cupcakes! In our house, we consider them a food group...