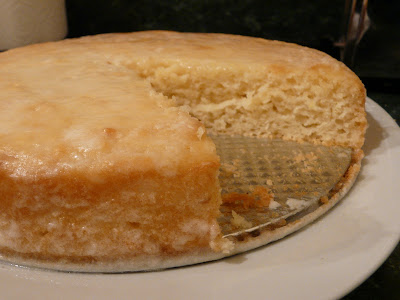 Here is the result of this week's baking project, a lemon yogurt cake with lemon powdered sugar glaze. Melly and Scarlett hung out peacefully with me in the kitchen while I baked, and Melly has learned a new trick. (At least I think it's new. It's new to me, anyway.) She climbs up my jeans and clamps on near my waist. I think she just wants to get a view from higher up, since she's not allowed on the counter.

And after BethAnn commented on the last entry that she enjoys Melly's pin-up poses, I came across this photo: 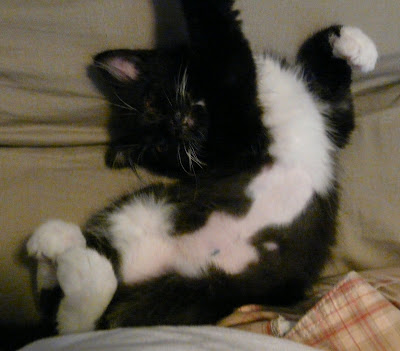 Edit: Since a couple people have asked about the recipe, here's the info. The recipe is from Smitten Kitchen, here, but I made some changes to accommodate what I happened to have handy.
- Instead of full fat yogurt, I used lowfat
- Instead of lime, I used the juice and zest of one large lemon
- I used half the amount of sugar called for
- Instead of the blackberry sauce, I made a glaze with a tablespoon of melted butter, a cup of powdered sugar, the juice of half a large lemon, and half a tablespoon of water. Before glazing, poke the cake all over with a fork so the glaze gets into the cake a little bit.
This cake stands up well to modifications, so you can get creative!
Posted by The Adventures of Scarlett and Melly at 9:30 PM

Okay, G made me laugh out loud.

Natalie, you're making my mouth water. I think I can smell that beautiful creation from here..

And I spy Melly's spay tattoo!! I always did love her belly.

Can I have the recipe? That looks yummy.....

Oh, I get it now! Serious cheesecake!!!

Melly's definitely got it going on.

Whenever I cook over there, Melly walks up to me and gives me "The Look" until I scoop her up and plop her on my shoulder. She contentedly sits on my shoulder while I scurry about the kitchen, turning this way and that. Sometimes she'll switch shoulders on her own if she wants the view from the other side.

I have to admit also that cooking at my place isn't the same without my little "Shoulder Soldier" sitting on her perch.

Can you post the recipe? I want to eat this as soon as possible!

Hi to the cats.

Oh my gosh, I have to try that recipe. Thank you!

Melly you are such a poser! I am hungry for a piece of that cake now. Would go nicely with a cup of earl grey tea. ;-) Maybe I will get adventurous and try to make it one day.