When I got home from work, I rigged up a little wire hook to hold the bathroom door open about an inch. Melly immediately redoubled her mewling and stuck as many paws as she could through the crack (I think there were three visible at one point). Scarlett was completely uninterested, so I started feeding both girls chicken, tossing bits to Melly through the crack in the door. This got Scarlett's attention, of course, and she gleefully scarfed down the treats, pausing to growl at Melly a couple of times. When the chicken was gone, she growled one more time and walked away (this is documented in the video below).

Well, as it turns out, my little hook rig was not nearly as ingenious as I thought. Melly escaped, and she squeezed herself through all kinds of tight spots so that I couldn't get her. Scarlett found Melly before I did and followed her around at a distance for a while. Melly paid no attention to Scarlett and galloped around the apartment, full steam ahead, with her tail straight up in the air. (I eventually gave up trying to catch her - there was just no hope.) Scarlett issued warning growls whenever Melly got within about a foot of her, and Melly obligingly backed off.

Eventually, Scarlett got tired of this game and retreated under the bed. I closed the door to give her some privacy from Melly (but didn't latch it in case Scarlett wanted to come out), and let Melly run around some more. When she finally slowed down, I managed to grab her and stick her back in the bathroom. Naturally she's been protesting loudly ever since. Scarlett came out from under the bed shortly after Melly was back in the bathroom, sniffed around for a while, and is now sleeping on her cat tree.

Any ideas on where to go from here? Is there any point in continuing to keep them separated? (At least while I'm here - there won't be unsupervised interaction for a while.)

In other news, Scarlett did use her litter box at some point in the past 24 hours - thank goodness.

And because we have not hit our quota of adorable Melly photos for today... 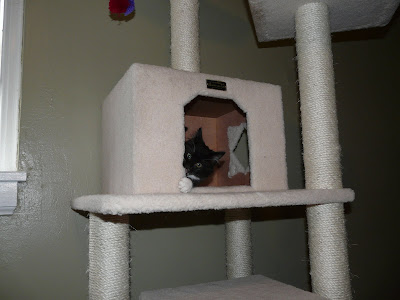 Posted by The Adventures of Scarlett and Melly at 6:20 PM

just keep trying. its take a while. it took our cats 3 months of "supervised" time until we could leave them alone with each other. it will come I promise.

I would probably have them both out, as long as you're home. That way you can get a good idea of how they're coming along. It sounds like Scarlett is good about taking the space she needs and Melly is very good about respecting her signals to leave her alone. That's a very nice start.

Both are so cute. Really cute family you've got there. :)

If Scarlett and Melly are communicating, that's a great start! Melly will get better about respecting Scarlett's space without the vocal clues, and Scarlett's bubble will diminish with more time. Shower both girls with lots and lots of love. Do what you're doing, and if you see Scarlett withdraw or sulking, give her a Melly-free day, then continue. Melly does need to expend her energy, and now that she knows lots of space and curtains and places to climb is out there, I'm sure the mewing is probably constant :)
Girls are more territorial than boys, so it takes longer to integrate, but if you keep their food full and shower them with affection and help them get used to each other slowly, it will all work out!

I wouldn't be as cautious as you've been about keeping them apart. There will be some hissing and growling, but a lot of that is usually just establishing pecking order. Do it.

We have two young cats, the older one is the bossy one, it's fun when they go to "summer camp" so we can go away for a few weeks.. our friends have 9 cats, so the pecking order gets re-established there. Scarlett might swat at Melly, but Melly is likely to learn to swat back.

We haven't seen blood from our cats since the first few months they were together. They just do play-fighting now. Again, they are young (under 3).