My mom sent me an email this morning asking if I could post this for her as she's hoping you'll have some suggestions. (I added the photos and captions of Star and Comet in happier times.) 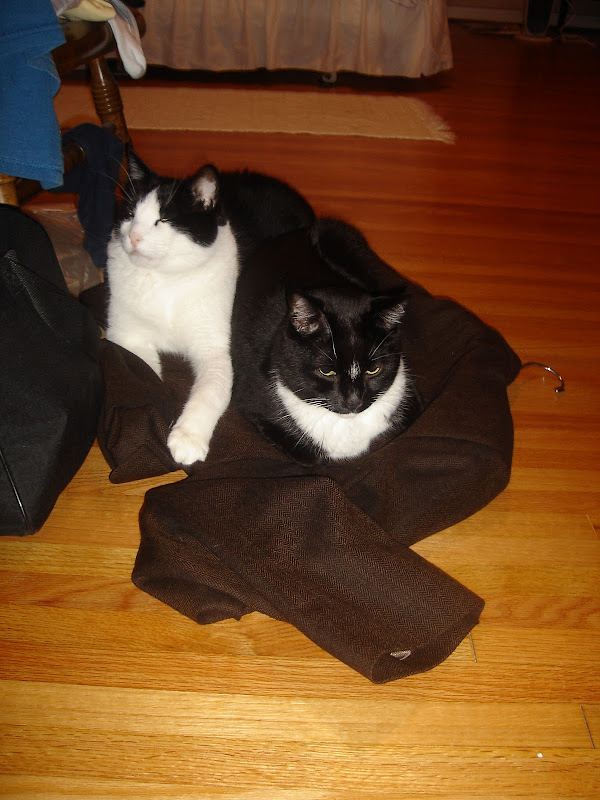 Star is Comet's brother. They chased each other every night and slept next to one another in the afternoons, often with an arm around the other, or with their heads nestled together.

Since the day before Comet's death, Star has been very vocal. He has always talked (chirped) to birds and yeowled when he wanted to go into a room if the door was closed, but now, when awake, he "talks" constantly. Oftentimes he sounds as if he is grumbling. Other times it is ramped up to angst. He follows me around, he very often wants to be held, and he comes when called-- and none of these are usual for him as he is a very independent sort of fellow. He is very smart and proud, rather finicky and dapper.

I know that Star misses his brother and companion. The night after Comet's death, Star was so inconsolably noisy that I finally wrapped him in my sweater and brought him to bed with me, and cried into his fur. Every day, as much as possible, I listen to him, talk to him, cuddle him, but he will not cease his grumbling and yeowling especially in the evenings and at night. My husband is not pleased and needs some sleep.

Does anyone have any advice for how to calm this poor kitty? 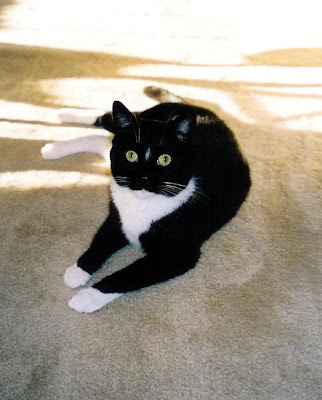 Why yes, I am handsome. 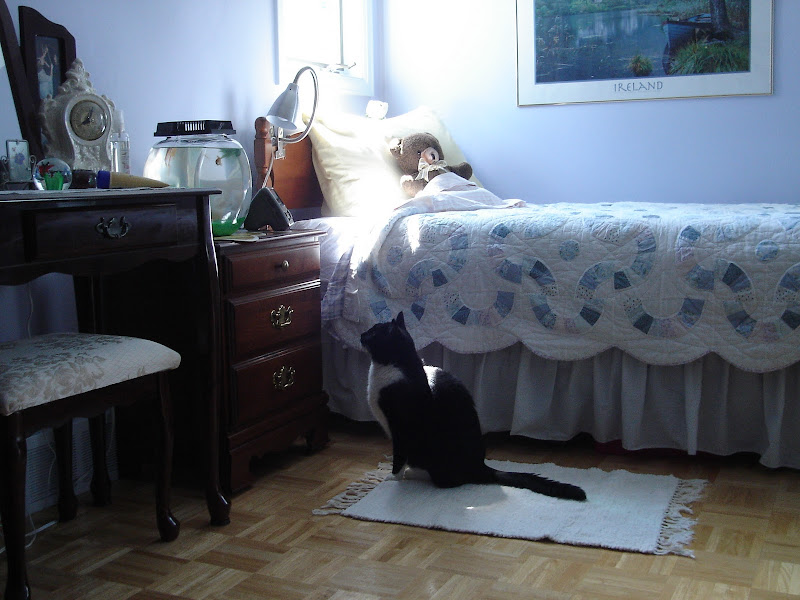 All right, fishies. Prepare to be lunch. 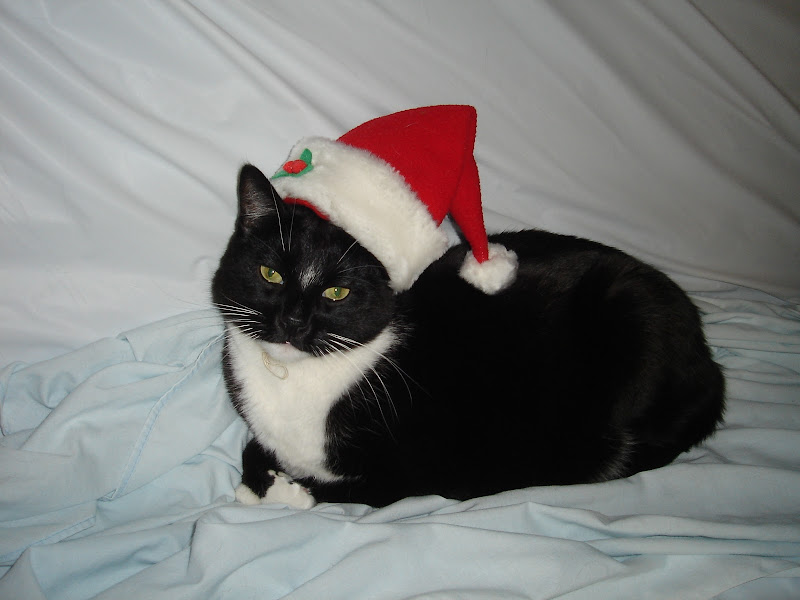 I know where you sleep.

Posted by The Adventures of Scarlett and Melly at 9:43 AM

Well, it will take time for him to get over Comet "leaving" - he is probably confused and scared and just plain sad. When our Floyd passed the cat it affected most was Lola - she is still sad, but is finally getting to be back to normal - and it has been 6 months. Feliway or one of the calming difusers could help, but it is going to take a while. If it seems especially bad, she could talk to her vet and they do have kitty anit-anxiety meds. It sounds like that could be of some help til things feel a little more normal for him again.

He's probably wondering where Comet went and is vocalizing looking for her (thinking if he calls, she'll come out of her hiding spot). Like you, he's grieving and needs some time...but eventually....another playmate. Not sure how old he is, but if he's senior, perhaps a lovey cat who is a few years old so it's not a pesky kitten, but is still another cat he (and you)can cuddle with. So sorry to hear about your loss!

I'd also suggest Feliway and Rescue Remedy in his water to help calm him. Also, cats crave routine, so keep your daily routine as normal as possible.

I agree with Feliway. I recently had twins and one of my cats found it very stressful. That helped him. I know too that cats can be given "kitty prozac" We had a perscription for my cat but never used it.

did you let him see his dead sibling? he may not realise what has happened, as it too late now for him to see the corpse,if he didnt already , get him a new companion there will be some poor puss desperatly needing a new home and Comet will lead you to it! May St Francis of Assisi aid you!

I agree with the suggestions for Feliway and Rescue Remedy. I also had a friend with a kitty on Prozac. It was very helpful with his stress.

Such love in your family. Comet and Star, Scarlett and Melly are so fortunate to have found you.

When we had two cats that had been together for years and one died, the other one (the MOST neurotic cat ever) insisted on some new routines. My husband and I were each assigned a "petting post" (me on the couch and hubby in rocking chair) and we had to pet him before leaving for work. Maybe you could set up a special nightime routine for the two of you? It may be soothing for both of you and help reassure Star that he isn't going anywhere.

Is there any bedding with Comet's scent on it? It might reassure Star. I also agree with the Feliway. We have used Clomicalm (from the vet) fairly successfully for anxiety in our cats. I am sure cats mourn and it may just take some time for him to grieve.
Kat Mommy Trish

Exactly as you are doing it. Hold the remaining kitties close, give them all the attention you can, an miss the ones over the Bridge.

Toss toys, give good food, an make sure the litterboxes are clean (one more litterbox than cats). Give the remaining ones lap time even when inconvenient.

Talk to the cats while looking them in the eye. We may not always know exactly what you are saying, but we know when you are focusing on us. We love that.

Seriously, we know when you are thinking of us, and that is all we ask for. Your attention...

Just do at least that and we will cope with losses of our best friend kitties over-the-Bridge and whatever happens.

All the suggestions posted here are great. Animals grieve as we grieve and need time to work through it just like we do. I too recommend Feliway and Rescue Remedy. Sharing some of Comet's old bedding or toys (or anything with Comet's scent on it) with Star is helpful.

The best thing you both can do though is love Star. Comfort Star, be with him as much as possible. Even more than usual. Talk to him. Hold him. Sit with him. Treat him like you would like to be treated if you were grieving. Also remember that Star can read you better than you can read him. So he might also be sensing your own sadness. That's okay. Just remember he looks to you to be reassured. You can comfort each other.

I know this will seem crazy but if his grieving is worse at night and it's driving your husband crazy, then perhaps you could sleep in another location with Star. With time his grieving will subside and then everyone can return to their old sleeping locations.

Kitty "prozac" and other anti-anxiety drugs exist. One of our cats has used them in the past. I would recommend these meds as a last resort. Time and love are the best medicines.

My heart goes out to you all. It's so hard to lose those we love.

I am going to add to the others and suggest Rescue Remedy. Also, I found a book on flower essences for cats to be very helpful when Stanley and I lost his brother Oliver a bit over a year ago. (note that rescue remedy is a combination of 5 flower essences. there are 39 original flower essences) This book had suggestions for helping cats with bereavement among many other issues. It sure helped Stanley. I have found animals really respond well to flower essences.

My heart goes out to you all as well.

Rescue Remedy is a God send, add a few drops to his water, or put it directly on his gums.

So sorry for your loss