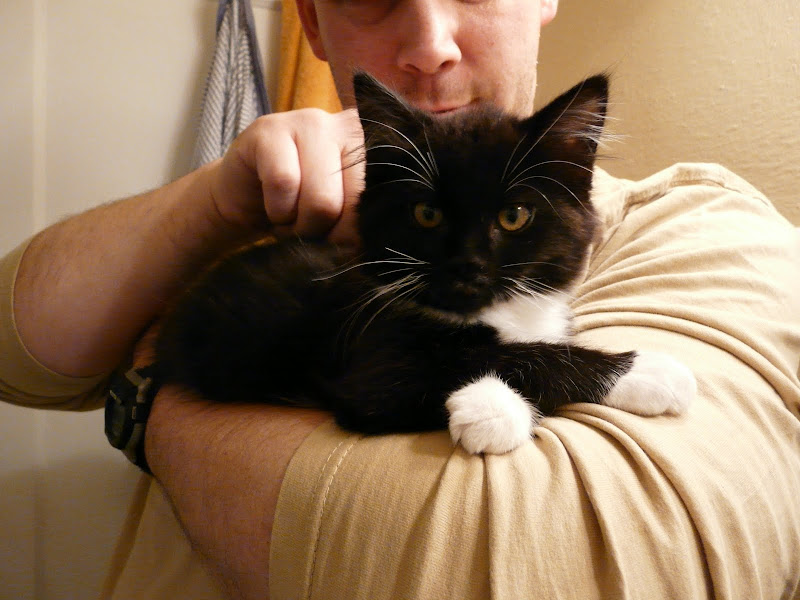 This is my boyfriend, Geoff, who had only just met Melly when I took this picture. It took her about 2 seconds to start purring after he picked her up: clearly, she's made a new friend. And he, despite professing to be a non-cat person, has fallen under her spell. 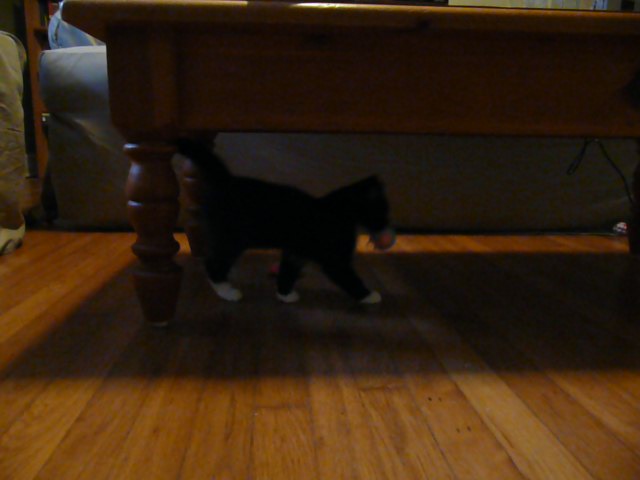 We confined Scarlett to the bedroom (not much of a confinement for her since she loves to look out the window there), and let Melly out to explore for a while. Of course, she found every one of Scarlett's toys, and had to try them all. She couldn't make up her mind which she liked best, so she'd bat one around, then carry it in her mouth over to the next toy, and repeat the process. I don't have a single non-blurry picture of this since she never stopped wiggling, but here you can see her trotting happily with a fuzzy jingle ball in her mouth.

Edit: I just saw Tanya's comment on the previous post containing her advice about letting Melly out... oops. Well, Scarlett sniffed around a bit and obviously noticed that the interloper had touched her stuff, but she didn't seem to mind much. Tomorrow, I'll put Scarlett in the bathroom when I let Melly out and see how that goes (another fun episode of musical rooms will be involved so they don't come face to face!).
Posted by The Adventures of Scarlett and Melly at 10:25 PM

True, sacrilege though it may be in this crowd, I'm not really a cat person, but KITTENS are great! They're playful and fun and cause even a true dog person such as me to squee with delight (many squees have ensued since Melly's arrival). On the other hand, Scarlett and I are buddies. We tend not to let on about our friendship when Natalie's around, but we're pretty tight.

Melly is just a cute as she can be, toy inspector fur sure!

It is awesome that you are both working through this. Just remember to keep Scarlett feeling comfy and safe in her relationship with you two. Melly will find her space in that relationship and eventually it will work out.

It's always the self-proclaimed non-cat people that fall the hardest.