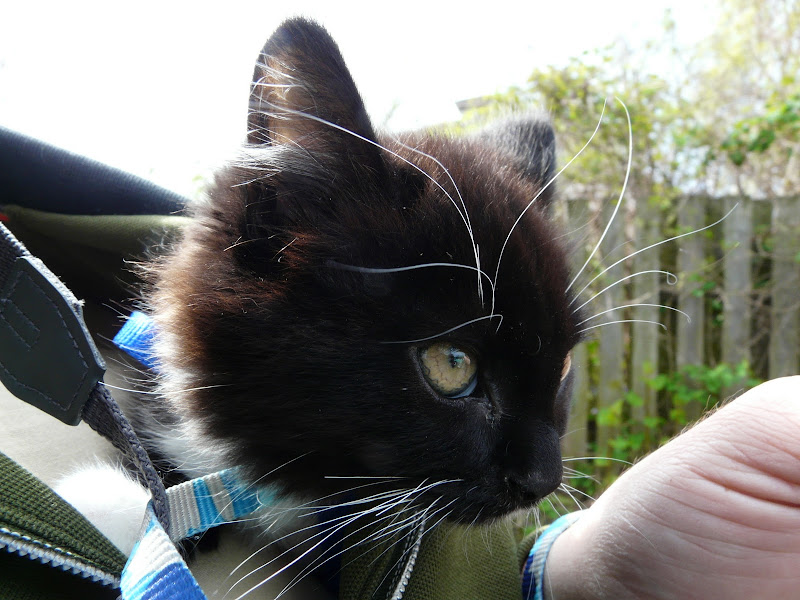 I received a voicemail from the cats' vet today that contained some interesting news: Melly has a parasite called Coccidia. The long and short of it is that I have to give her meds by syringe for nine days. Coccidia is contagious, so this is another reason to keep Scarlett and Melly apart. As an adult cat, Scarlett is unlikely to contract it, especially since she'd have to come into contact with Melly's feces to do so, but I'd rather not take any chances. This doesn't actually affect my plan too much, though, since I wasn't going to start allowing interaction through a cracked door for a few more days.

Edit: I just got off the phone with Sue and would like to add here that I in no way blame Sue for Melly's parasite issue. Melly doesn't have the obvious symptom of Coccidia (very stinky diarrhea), so there's really no way anyone would've guessed to test for it. After nine days of meds, Melly should be right as rain. :)

The other interesting development is that Scarlett does not seem to be using her litter box. I'll have a better idea after today since I cleaned it out, but it's particularly odd since I've searched the apartment and I can't find evidence that she's going somewhere else. (She used the laundry hamper once when I had the temerity to switch litter box styles; I've since switched back and gotten an enclosed laundry hamper.) Another thing to keep an eye on. 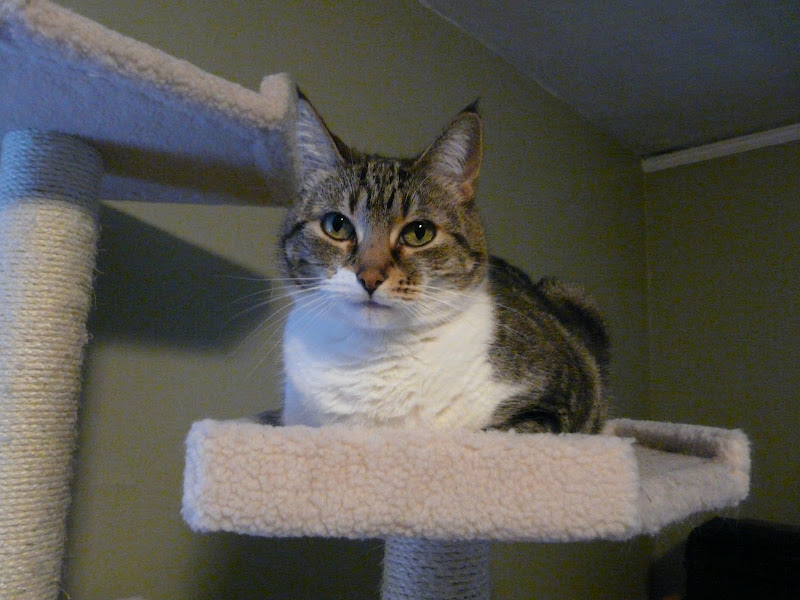 Miss Melly just went back into her isolation room after about an hour of exploration and adventure in the apartment. In the picture below, she has located the source of an ever-so-enticing aroma. Her attempts to get into the bag eventually resulted in her falling off the table. (Note: these are Geoff's pork rinds. I prefer healthier fare like anything made out of chocolate.) 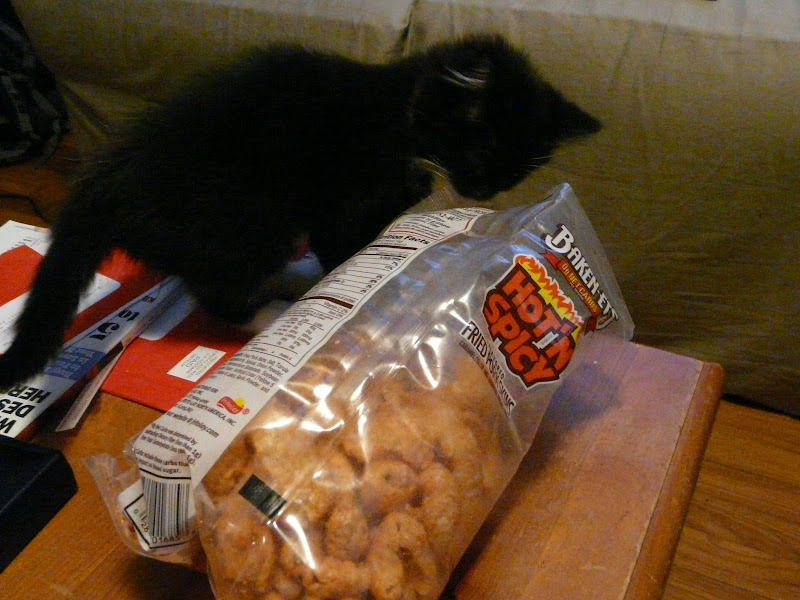 I'll close with an email Geoff's mom just sent: "I am not signed in to comment on the blog, but here goes..... Geoff, you are so "outed"! After all your pronouncements that you don't like cats----this certainly proves otherwise. I knew you were really just a big softie!"

Posted by The Adventures of Scarlett and Melly at 6:14 PM

Natalie, I am very surprised and a bit mortified. She showed no signs of coccidia, and with her regular vet checks at the shelter, this certainly should have been caught.

Now I'm going to track down your phone number and call you.

Now that I'm past my initial shock, I'm sure Dr. Warren explained that coccidia is a parasite that's easily treatable and generally affects young kittens and puppies.

Still, you've had enough ups and downs already. Thank you for sticking with her. I know that you know she's worth the temporary inconvenience. But still..

Please accept my apologies for adopting a kitten to with bugs in her poo. Uck.

Oh it is too bad that Melly has the parasite, but at least it is easily treatable. It is good that you are going with the flow - sometimes you just don't get the signs you would expect with kittens. Virgil had a tapeworm and it didn't get caught at first either - as long as it isn't too big a deal then there is no need to worry. And it is also good that you realize that Sue didn't do it on purpose or anything.

As far as Scarlet, I am not sure what would be up with the litter thing if there is no evidence elsewhere - either she is hiding it really well or well, I am not sure.

I hope that everyone is back to normal soon!

Coccidia is very common, therefore well-known and easily treated. Most adult cats are carriers, but do not (usually past kittenhood) exhibit symptoms, although I have seen adult cats get sick in a shelter environment when their immune systems are usually not at their best.

Just be glad you have (so far, knock on wood) escaped the stinky poop :) Here we are talking about poop again! But it really is important. Also, I'm sure you know this, but because kittens are so small even a small amount of diarrhea or vomiting can lead to dehydration, so watch for it.

Sorry, Melly, antibiotics are no fun but I'm sure you'll bounce right back!!

Well, I suppose the silver lining here is that Melly will be used to getting medicine from your hand. I had to give my cat tapeworm pills once long after kittenhood and an exercise physiologist determined I expended 700 calories every time I had to do this. Receiving the blood transfusions afterward was the worst part.

Been there done that! Ditto on everything Tanya said. Many cats carry it even if they are never symptomatic. Treatment will help with the current symptoms altho it is possible for recurrence. Eventually the kittens will outgrow it. Parasites are very hard to detect in the fecal tests (it's hit or miss) so no guilt feelings anybody. "It's just a kitty thing."

Miss Melly you are just so adorable. I know you'll bounce right back from this. You are so lucky to have such great humans. And they are lucky to have you and the lovely Ms. Scarlett.

Our Sadie had coccidia as a kitten. Her diarrhea was so bad that she started avoiding her litter box. What helped was to have several boxes with the Kitten Attract litter in them.

This parasite can be stubborn to get rid of sometimes, so be sure to have her stool re-tested. Also, giving her probiotics mixed with her food is a good idea. The meds will likely disrupt her good gut bacteria.

Probiotics are a good idea. I always sprinkle a little in the babies' canned food for good measure.

Turns out I'll be keeping Melly company both in the antibiotic and probiotic departments. My dentist is breaking out the big guns for my upcoming oral surgery, yay!

I'm having Melly withdrawal, what is the fluffernutter up to today?

Tanya: The Melly bean is home without humans today, so there hasn't been any documentation of her adventures. Hopefully she'll be amenable to a photo shoot when I get home, though :)