Last night, I was working on my computer when I realized that I hadn't heard any growling or tussling in a while. I turned the camera on and tiptoed into the living room to find this: 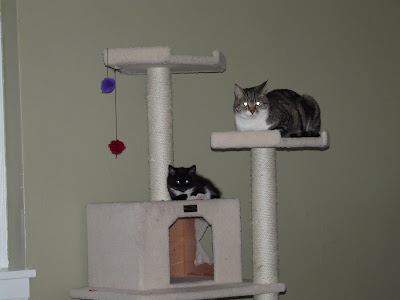 I think they were just worn out after hours of fighting and had called a temporary truce, but hey, I'll take it.

Last night was the first night Melly hasn't been confined to the bathroom. Normally, Scarlett sleeps next to me or at my feet, so I was curious to see how Melly would fit in. As it turned out, Melly and Scarlett took turns on the bed (the exchanges were loud and hissy). Scarlett is an excellent companion as she purrs constantly and doesn't move around much; Melly's version of snuggling is extremely active and involves biting my chin. Needless to say, I got minimal sleep during Melly's turns on the bed.

There is still a fair amount of growling, stemming mostly from Melly trying to attack Scarlett's tail. She seems to think that anything that swishes so invitingly is fair game for pounces. The exchange in the video below followed about ten minutes of Melly stalking Scarlett's tail, and Scarlett ignoring her while looking at me as if to make sure I was taking note of this misbehavior.

An interesting development is that the kitties are sharing quite peaceably. They are each helping themselves to each other's food (Scarlett's diet is pretty much out the window since I have no idea who's eating what - on the plus side, Melly is giving her plenty of exercise). I have also caught Scarlett digging around in Melly's litter box, and when I changed the litter in both boxes this morning, it looked like Melly had used Scarlett's at least once. And, both kitties are using all of the scratching posts: Melly's in the bathroom, Scarlett's in the hallway, and the ones on the tree.

It's been suspiciously quiet in here as I've been typing this, so I took a quick break to check the usual cat haunts. This is what I found: 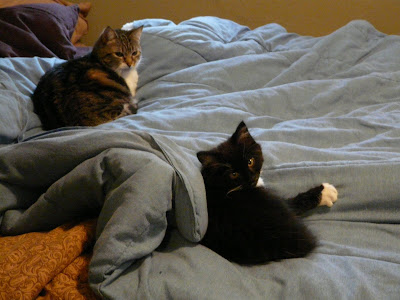 All together now: Awwwwwww!
Posted by The Adventures of Scarlett and Melly at 10:17 AM

So cute... Melly seems to have big paws. I think she is going to grow to be a good size cat!

When I was introducing a 3-month old Mayhem to a 2.5-year old Chaos and freaking about the noise and fighting, I remember my friend Jeanne's advice (Jeanne being a veteran of many, many cat introductions): "Was there blood? Don't worry unless there's blood."

My cockles are warm and cozy. I actually let out a very contented sigh..

Natalie, be careful about sharing litterboxes as long as Melly is on antibiotics for coccidia. The risk of passing it on is small, but not worth taking a chance.

Smooches for both girls, please.

So pleased to hear about the bizarre sharing schemes that they have invented for themselves--so the way I see it is, everything, including Natalie, is just a time share, like condos are for humans. Running into one another is slightly awkward and cause for complaint, but otherwise, they stick to the system :) I so enjoyed hanging out with all of you yesterday, cats and humans alike. I shall be following the blog faithfully! I wish I had more time to spend with the kitties...

Awww..so glad that they are at the tolerating stage. So cute to see them both on the bed and close too. Congrats on the progress.

Glad they are sharing (or as anon said, "tolerating").

Tails are magical objects that MUST BE CHASED. Wait until one is under the covers and one is above the covers. It's the two-cat version of Bed Mice.

AWWWWWE is right...Scarlett in the corner on the scratching post is adorable...she's trying to accept Melly...