I'm back! I hope you've all enjoyed Geoff's updates in my absence.

As Geoff mentioned earlier, Melly went to the vet this afternoon. Naturally, she charmed everyone there with her rambunctious antics and all-around adorableness. (The fact that Sue is beloved at the vet's office didn't hurt either :) Aside from a possible cold - she sneezes a lot - Melly's healthy, weighing in at 2.7 pounds. This surprised the vet tech, who said Melly had way more than 2.7 pounds of personality. Melly also got a vaccine, which was thoroughly unpleasant, and which has made her a bit lethargic.

At Tanya's suggestion, I've added a second litter box with a different kind of litter in the bathroom. Melly has already used it; if she continues to do so, I'll take out the old litter box. Geoff also got Melly a scratching post, which she uses both for its intended purpose and to sleep on. And, in the interest of attempting the bedding exchange again, I've added a folded up towel next to the scratching post. Last I saw Melly, she was curled up on it, snoozing. As you can imagine, the bathroom is getting pretty cluttered! 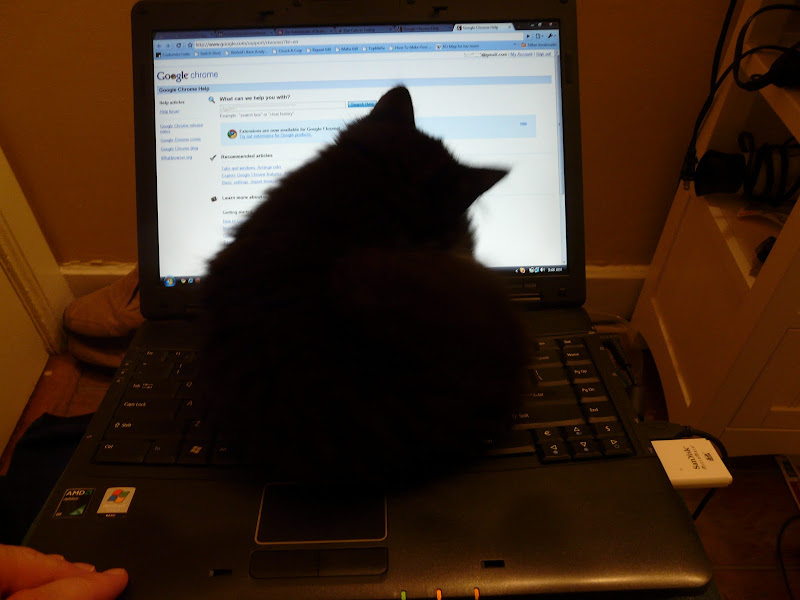 Scarlett's food has been relocated to just outside the door of the bathroom. She adapted to this fairly quickly, which isn't terribly surprising since Scarlett is a great lover of all things edible. 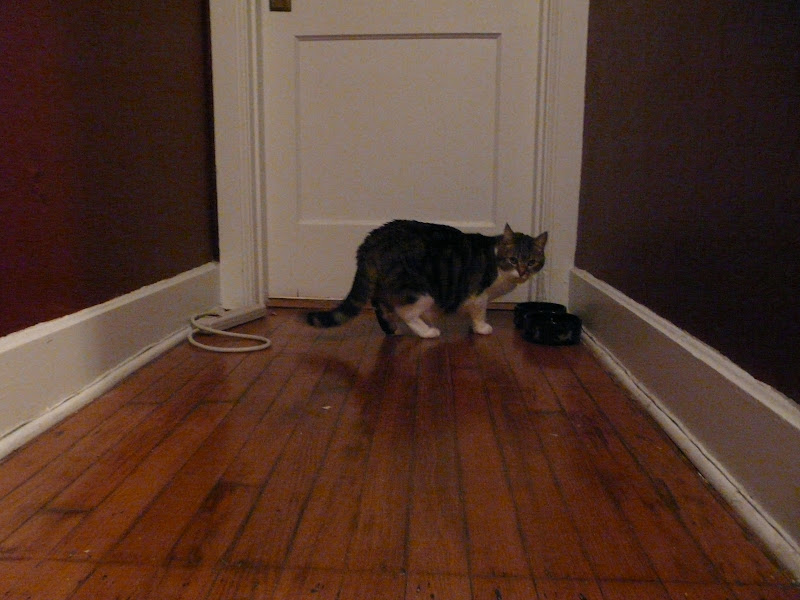 She seemed to hope that the arrangement was temporary, though, since she went back to where her food normally goes and mewed expectantly. 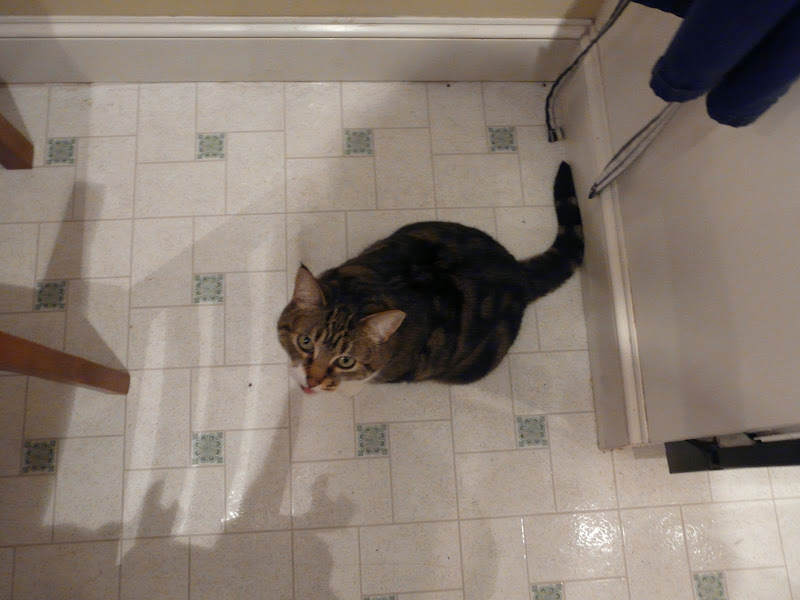 After this, Geoff took a piece of chicken to feed to Melly and I took one to feed to Scarlett. We sat on opposite sides of the bathroom door and fed bits of the chicken to the kitties. Geoff said that Melly didn't react to Scarlett's presence on the other side of the door and concentrated solely on nibbling her treats. Scarlett was very much aware of Melly, but was too distracted by the chicken to bother with tail lashing or anything of the like. After the chicken ran out, though, she sniffed under the door and let out quite a growl. Since then she's been a bit angsty, and even went so far as to swat at Geoff a few times when he tried to pet her. (He would like me to note that he managed to avoid injury due to his super-cat-like reflexes.) Scarlett remains friendly toward me, possibly because I currently have less of Melly's scent on me.

My plan is to continue the current routine of letting Melly out occasionally while Scarlett is confined, and leaving Scarlett's food by the bathroom door. We'll keep doing the simultaneous chicken feeding, and I will give the bedding exchange another try in a few days after the cats have a chance to get their scents on the newly-washed towels. This transition is much easier now that there's an established routine in place! 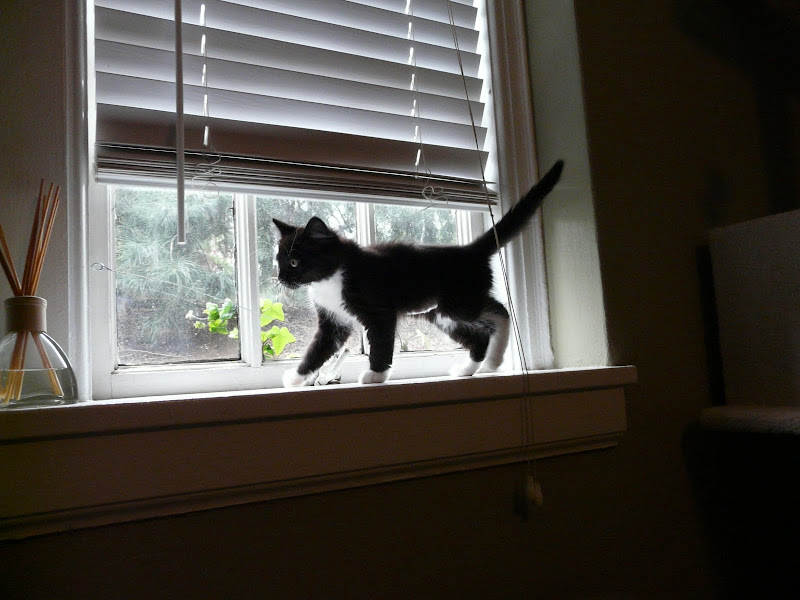 Posted by The Adventures of Scarlett and Melly at 7:28 PM

oh my gosh, I can see the shaved belly in the last photo. A soft pink little kitten belly squeeeeeee eeeee aaaaah miss Melly you make me giddy.

Please give a kiss to Melly for me for being an extra-good girl today, litterbox for the win!

Hey Tanya ~ If you look at the Sally/Trader Joe's post on my blog you can see the little poof on her belly that you asked about. It had started to go down by then.

Thanks for all the good advice for Natalie and Geoff. I think our girl has a loving home.

Don't fret too much about Scarlett getting used to Melly...the first few weeks after I brought Olivia home my older cat (an only cat for 9 years) was alternately scared of her and cranky with her...

I was so worried about him never being the same again...he was mad at me too...but slowly they started playing...she adored him, following him everywhere and he just wanted to be alone...LOL...

then one day I found them side by side on a bench watching the chipmunk outside...from then on they were friends, racing around the house and my guy never was the same, Olivia added a joy to his (and my) life with her constant bounce and enthusiasm...wishing the same for your girls...

Way to go! Sounds like things are progressing well. Poor Geoff - I'm sure Scarlett didn't mean it personally. It will all smooth out soon. You two are doing a great job.

OK people, I've got a lot of work to do what with movers coming on Friday and house closing in 9 days. I will NEVER get it all done if you and Sue and Laurie keep posting all this wonderful distracting stuff. THANK YOU!

You are doing a great job and things are progressing nicely! I love that you are spending time with both girls during the transition. :-)

Sounds like Melly has Geoff wrapped around her paw. It also sounds like things are progressing very well. Patience! I'm sure it will all work out. :D

you are so patient! i think you will be able to let melly run around freely soon. i am sure your girls will be just fine together. you have two very beautiful kitties.
hugs,
puglette
:o)

Husband calls them "ninja cat-like reflexes." I like that all men are the same but different...

I gotta tell ya. I'm loving these updates (even though I can't get to then but once or twice a week lately).