Melly Goes to the Vet

It was a beautiful day here in Melly-land so for her appointment with the veterinarian today, I (Geoff the Boyfriend) decided to put on her harness and leash and go for a stroll with her. At first, she wasn't crazy about wearing the harness.
And after we first got outside, she was a little reluctant to leave the safe confines of my jacket. 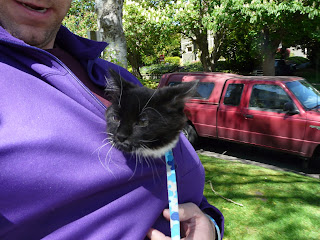 But, after she got used to being outside again (it has been a while) she enjoyed a bit of exploring.
Walking a kitten on a leash does NOT lend itself to any sort of linear progress towards an ultimate destination. Eventually the time came to scoop her up and head to meet up with Natalie and go to the vet's office, where she was freed from her harness and allowed to explore the exam room prior to her checkup, ultimately leading her to the windowsill that she favored at her last visit.
Eventually we got down to business...well, the vet and the tech did, while Natalie and I watched. Melly needed 3 more shots which she REALLY did not enjoy. She wasn't a fan of getting her temp taken either, but her complaining about that was mild compared to the attempted assault during the vaccines. However, now she is all done with them and was given a clean bill of health and shouldn't have to go back for another year. Plus, we also learned that she's up to 3.8 pounds now.
Since getting home (she rode the whole way in my coat and was quite sedate in there) she's been quite mellow and sleepy, which is to be expected after the shots. It seems she's also developed an affinity for the television remote. 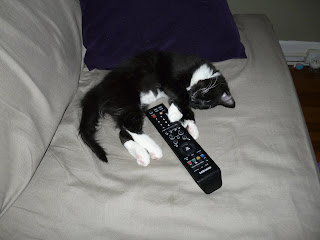 Geoff, you are becoming quite the documentarian of Melly, aren't you? I love the videos and, as I am sure you are well aware, Melly has you wrapped around her paw.

Melly is so adorable! What a lucky little girl. And she totally has claimed Geoff as her own :D P.S. Will be trying out the Lemon Yogurt cake tomorrow. Can't wait to bake it!

Love the alligator roll in the first video!!!

I'm glad you guys stuck it out. They may end up being like my two -- not best buddies but they tolerate each other. And I'm glad they have each other for company when we are gone for hours -- and they are probably glad too although they wouldn't admit it! :)

Love the photo of her in the jacket! Adorable.

Mommy laughed at Melly going all boneless in her harness! We do that too. We envy Melly getting personal transport to the vet...none of that horrible car ride experience! Seriously, we cannot understand Humans and how they can stand to ride around in those things.
xx lounge kats

I love the video of Melly in the window almost doing a little dance there. Melly you are such a "ham". She is so cute and is growing fast.

Wow... what a big day! And totally sacked out at the end with the remote... too cute :)

What a little goofball. My cats "run" on shiny surfaces like the windowsill at the vet - Sasha prefers to run on windows and mirrors.