Melly can be a little bit of a bully. One of her favorite games is waiting until Scarlett has settled in for a doze, then vigorously attacking her. Scarlett naturally doesn't tolerate that and administers a good scolding and swatting before grumpily stalking away. Of course, that is what Melly wanted from the start, and she happily curls up in Scarlett's recently vacated (and still warm) spot.

One of Scarlett's favorite spots remains out of reach for Melly: the bedroom windowsill. When Scarlett has had enough of Melly's shenanigans, that is where she retreats. Unfortunately for Scarlett, I don't think it will be long before Melly can make the leap. 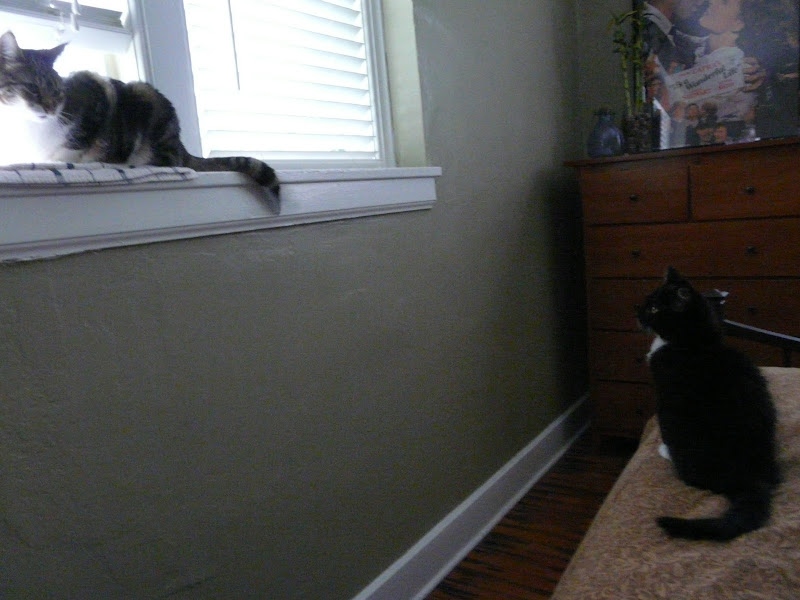 In the meantime, she'll settle for gazing longingly at the windowsill. 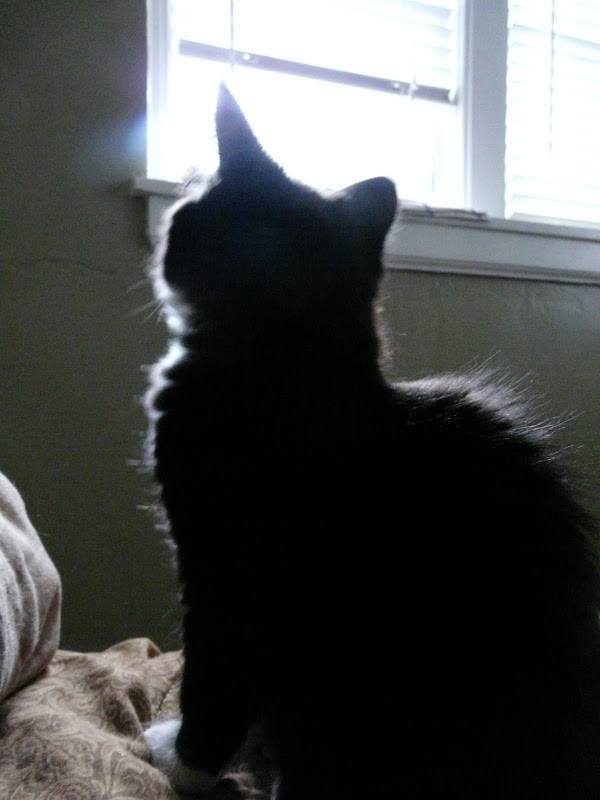 Edit: I don't mean to suggest that Melly is battering poor Scarlett into a quivering mass of scared felinity. They generally interact pretty peaceably and still like to nap a few feet away from each other. And the time they spend running thundering laps around the apartment is pretty evenly split as far as who is chasing whom. Melly just derives a great deal of enjoyment in stealing Scarlett's nap spot sometimes - and sometimes Scarlett stands her ground and it's Melly who has to walk away. Honestly, I think they're getting along fine and have a pretty typical "sibling" dynamic.
Posted by The Adventures of Scarlett and Melly at 1:16 PM

Melly just cracks me up. She's smart enough to do the submissive thing but has that wild and wooly crazy kitten thing going big time.

She's a nut, that's for darn sure. Scarlett puts up with it pretty well, I think: she picks her battles and lets Melly win sometimes, and other times makes it quite clear that she's the boss.

I have to say that Scarlett is quite tolerant of, although clearly not entirely happy with, Melly. I don't get the sense that Melly is too concerned with Scarlett's opinion of her, however. Who knew Scarlett was such a diplomat? Or Melly such a social engineer?

I love the dynamic!

Chaos is 6.5 and Mayhem is 4. She still does the same thing to him!

The video is so cute!!! Melly is a little punk! She makes me smile.

What a beast that Melly!!!!

Oh Melly, you are such a doll. You just want to have all the "best" spots in the house, don't you?

Melly you are such a silly. Now you know that if you get to rambunctious for Scarlett, she can just sit on you since right now she is twice your size and then some. Scarlett you are such a good sport.

Melly has to work on her jab.

She's little -- a veritable featherweight -- compared with Scarlett whom I would guess fights in the light-heavyweight class.

A small boxer should be deft and needs to be light on her feet, but Melly keeps throwing these big, roundhouse, haymaker punches. One of these days, Scarlett is going to connect with a big righthand and Melly will be seeing stars. Melly, girl -- "Float like a butterfly, sting like a bee!"

I adored this video.