When I approached my apartment building yesterday on my way home from spending some time in Seattle, I noticed that the blinds in one of the living room windows were a bit askew. I didn't think too much of it at the time.

After greeting the kitties, who were quite happy to see me, I did a quick tour of the apartment and found everything just as I'd left it. 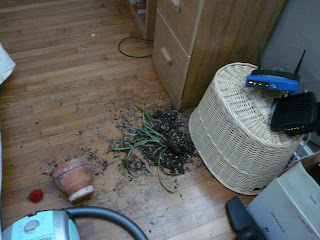 That plant had been on the sill of the window whose blinds were askew. The second of the two spider plants was still on the sill, though it had miraculously become quite sparse over the weekend.*

Melly very much enjoyed the cleanup process and "helped" by chasing the broom and tracking dirt everywhere. Scarlett, who affected an air of innocence, made it clear that she was quite displeased with me for leaving her to watch over such a terror.** 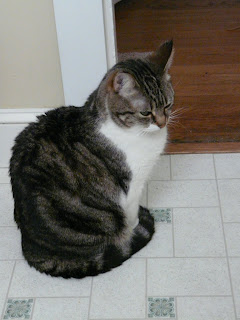 * Research indicates that spider plants are not toxic to cats, though they may cause vomiting.

** I doubt Melly could have made the jump to that windowsill.
Posted by The Adventures of Scarlett and Melly at 7:28 AM

Hmm, was there some way should climb to the window, or jump from somewhere near?

I think every kitten takes out at least one plant. I've had excellent luck with getting out the vacuum to do the cleanup and vacuuming for a LONG, LONG time - the plants are usually left alone after that.

We get a lot of broom chasing at our house from the younger cats - the older ones don't really show an interest but young cats seem to find it to be a fun toy!

I took all my plants to my office after repeated attacks by kittens who wanted to dig in the dirt. My blinds have also suffered. My little genius Sasha chewed and tore off a section of the blinds that leaves him a perfect cat-sized hole to use if he wants to sit on the window sill when the blinds are down.

Katie Scarlett finally has someone to take the heat for her antics! Cool. Nice story.

I don't normally keep many plants (as I did not inherit my mother's green thumb, they tend to die quickly), but when I moved into my new apartment I got a few low-maintenance ones as gifts and have managed to keep them alive. Scarlett mostly leaves them alone but investigates occasionally; Melly has so far shown no interest.

I really think Scarlett knocked the plant down and attempted to put the blame on Melly. Scarlett's always been a bit of a prankster: before I got an enclosed laundry basket, she used to pull undergarments and socks out of the laundry and scatter them about the apartment - but only when guests were coming.

I'm liking Scarlett's attitude. She's a cunning little thing, isn't she hehe... I like it!

Mommy will only grow cactus indoors. She's mean like that!

little mischief makers! i once came home to a circle of potting soil on the carpet in my living room. my kitty had pawed open the cupboard where it was stored, dragged the bag of soil out and had a very merry time spinning about with the bag of soil. i had opened the bag and used a small amount so he could smell the soil. have fun with your girls!
hugs,
puglette
:o)

I have seen that sight way too many times-- munched plants, knocked over plants, etc. Both of my cats LOVE spider plants and would eat them entirely completely to dirt level if I didn't put them out of reach... I feel bad but they don't munch sustainably!

No plants and no vases of flowers. They wouldn't last long with my tabby cat who does the zoomies around my apartment chasing my other kitty.

Scarlett must have been waiting for this! Now she can do all kinds of fun & mischievous things she's been holding back from and blame them on Melly. I can't wait to see what she does next!

We know who did it! It was that introoder called "Not Me". He gets around here sometimes too...

my harmony (she's a black and white just like melly) has eaten my african violet, chilli sprouts and orchid so far. she's also fond of burrowing into the dresser drawers and flicking out socks, underwear, tees...

Glad you checked on the toxicity!!! I check everything now after the lily CATastrophe. Lesson learned for sure! I was even going to get my mom-in-law some roses for Mother's Day, and I read that they could make a cat sick if they were ingested. And she has several. Needless to say, she didn't get roses.

I'm liking that Scarlett more all the time. She's a wily one, she is.