When I sit on the living room couch, both cats want to sit in my lap. Here is how it normally works: if Melly gets to my lap first, Scarlett stays at least a few feet away and acts completely disinterested. If Scarlett gets to my lap first, Melly lets her sit for a few minutes then gnaws her ear until she leaves. Melly then takes her spot. Melly, who cannot be rewarded for such behavior, is relocated and Scarlett is retrieved. If Geoff is there, he takes Melly so that Scarlett can sit peacefully on my lap (obviously, both cats are fine with that). If Geoff is not there, the cycle is repeated a couple of times until I give up, which usually results in Melly laying next to me in her usual pin-up pose and Scarlett looking disapprovingly on from the back of the couch. Never are the two within a couple feet of each other.
This is why, when Geoff emailed me the photo below (I was at work at the time) with the caption, "Could I get a few more cats for my little nest?" I was beyond thrilled. He took it with his cell phone camera - retrieving the actual camera would've disturbed the felines - and he reported that they had been there for over ten minutes! Ten minutes!! 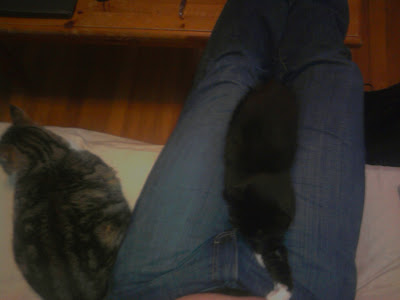 Geoff sent another update later: "After a bit of activity from Melly, they're back to chilling. We're close to half an hour of tranquil kitties napping... I want to get up, but don't want to disrupt the peace." My response involved copious use of all-caps and exclamation points. There is also a possibility that I was doing a very subtle happy dance at my desk.

My friend Jackie has a theory that when I'm not home, the cats cuddle; the wrestling and sparring is just an act they put on for me. I'm starting to think she may be on to something.
Posted by The Adventures of Scarlett and Melly at 4:20 PM

Too cute! The rule at our house and other cat-friends is that if one person has a kitteh or two on them, they can invoke "kitty rule", meaning the other person is obligated to get up and fetch water, the remote, whatever.

The wrestling and sparring is not unusual with younger cats, especially with a young Melly :-)

I feel obligated to clarify that my "could I get a few more cats" comment was, alas, sarcastic. I didn't want anyone misinterpreting that and thinking I was a converted cat person.

That said, I ardently share Natalie's glee about the napping in close proximity and was really blown away when, after a bit of awake time, in which Melly did poke at Scarlett a bit, they went right back to snuggling in/against my lap.

Geoff ~ You're not fooling anyone. Except perhaps yourself. But I'll play along..

What Sue said. You wear Melly around the kitchen like a pirate wears a parrot. You take Melly for walks on a leash. You keep her in your jacket while you drive. You don't get up off of the couch because Melly is asleep in your lap. It's over. Face it.

Natalie, I am intrigued by your friend Jackie's thoughts and would like to subscribe to her newsletter.

Jackie speaks true: Cats have entirely different agendas in the absence if humans.

We are Cats, We know.

All of the above and then some!

What Sue and G said, Geoff. It's over. You're busted. Resistance is futile. Acceptance is the final stage!