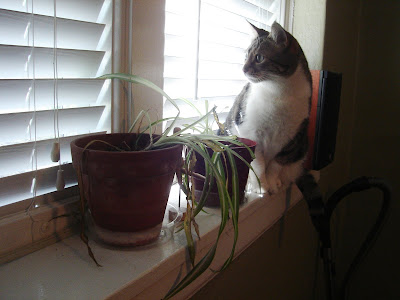 "Breakfast? I don't know what you're talking about.
I'm innocently looking out the window."

I love breakfast. Not harried weekday ones in which one wolfs down a bowl of cereal - weekend breakfasts. French toast, waffles, pancakes, sticky buns, omelettes... I love them all. Willow Bird Baking has posted some amazing-looking waffles, but I, tragically, have no iron on which to make them. (My love for waffles goes way back: my parents have a tape of me when I was three singing a song entitled, "Special Waffles.") Luckily for me, WB recently posted a recipe for eggs in a french toast basket that is currently my favorite weekend breakfast. The best part is that it's very easy to make.

I used WB's recipe as a jumping-off point and have modified it differently the three times I've made it based on what I happened to have in my fridge. Here's a version of my modified recipe, with notes on how you can adapt it further.
Eggs in a French Toast Basket

Ingredients
2-3 tablespoon yogurt or milk (I've used skim milk and lowfat vanilla yogurt, but any yogurt, milk, or cream would work fine)
1 egg
1 teaspoon of honey, warmed in the microwave for about 20 seconds (Maple syrup would work too. Also, don't microwave it in the plastic bear - it will melt. Do not ask how I know this.)
2 tablespoons cinnamon (or whatever amount you like - I like it very cinnamony)
1 tablespoon nutmeg
small pinch of salt

1 egg
1 piece of bread (french bread, challah, brioche, etc. all make for amazing french toast, but I almost never have that on hand and therefore use whole wheat sandwich bread)

Whisk everything but the bread and the second egg together in a bowl, then pour into a pie dish (if you have a roux whisk, you can skip the bowl step and do everything in the pie dish). If you used yogurt, there will be some lumps - don't worry about it.

Use a cookie cutter to cut a hole in the middle of the slice of bread (if you're like me and have only Christmas cookie cutters, a glass will work). Soak the bread and the cut-out in the pie dish, about 30 seconds on each side, or until as much liquid is absorbed as possible. The cut-out will be a mini french toast - just cook it along with the bread.

Heat butter or vegetable oil in a frying pan. If you like your egg yolk liquidy, put the pan on medium; if you like it firmer, put the pan on medium-low. Put the bread in the pan, then crack the other egg into the hole. Salt and pepper the egg, and cook the bread until it's golden brown on the bottom. Flip it (carefully!) and cook the other side until it's golden brown.

When the bread is golden brown on both sides, put it on the middle rack of the oven for about four minutes. Serve immediately with maple syrup. I have no pictures of this recipe because I followed the directions and served immediately :)
Posted by The Adventures of Scarlett and Melly at 5:15 PM

What a lovely portrait of Katie Scarlett in quiet and alert contemplation. And no sign of the Tasmanian Devil!

Thanks for the recipe. French toast is my favorite!

Yum!! What time is brunch?