Interactions between the Beasties

Hi, it's Geoff again, giving Natalie the night off:
After about a week and a half away from the cats, today I spent the day in their realm. In my time away, a few things have certainly changed...Melly is a bit bigger and Scarlett's tolerance seems to be increasing.
At one point, Scarlett lay patiently while Melly provided her cleaning services to Scarlett's hindquarters. Scarlett was, in theory, sleeping, but she did look up to see what was going on at her flanks and then put her head back down. By the time I got the camera, I could only catch this: 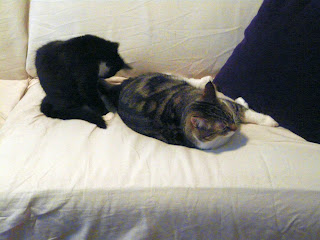 Yeah, Melly had moved on to self-laving, but tranquility was still evident. However, shortly after this, Scarlett started moving, leading to the inevitable pounce by Melly, then a brief scuffle ensued. Scarlett ended up fleeing the scene and took up residence on the love seat, while Melly simply settled in right in the same spot and a staring contest was taken up by the feline competitors: 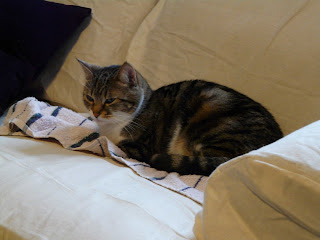 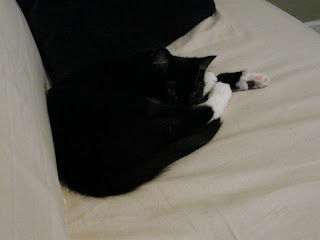 On Scarlett's part the staring included a pronounced element of scowling...though, I'm not too sure how much of that is from being peeved and how much is simply because her face just normally looks like that (as Natalie mentioned before).
Eventually, however, they resumed activities together, with both fully awake and alert, gazing into the great outdoors: 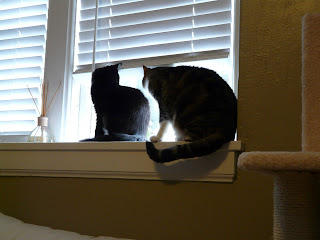 Intergration complete? We think so!

And I am certain you didn't miss Melly one bit while you were gone, right Geoff? Right?

I think Scarlett has finally come to the conclusion that Melly is irrepressible and not going anywhere. She has reached "acceptance".

Love the pic of them looking out the window together!

Glad to see the detente there :)Melly is quite irresistible.

It is good to see things are getting more mellow there - we are just starting to go through that at our house (though doubled with 2 new kittens - and 4 older cats) and I hope we can get to this point sooner than later!

@G, I can't honestly say I "missed" her, inasmuch as there was no notable vacancy or absence in my being, but I have enjoyed being back in her midst. She is quite hilarious.

One pic I opted to leave out, mainly because it's JUST a picture, with no sound. It's of the two....ahhh, never mind, I'll just go post it and tell the story.

I have two girls. They are a year apart in ages (now 5 and 4). I got the second one when the first girl was 1. (I guess she got more spoiled being any only child in one year than I thought???) These years later, I've come to realize that they will never be friends. They just co-exist -- occasionally having their mean moments towards each other. But then I'll find them on the bed together -- not cuddling/not touching, but on the bed at the same time.

Same with mine, they co-exist and they can be caught sometimes cleaning one another. Of course the cleaning results in some wrestling too. I have on the rare occasion caught them sleeping together on the same blanket, gasp!