The last time I made something with rhubarb, it was August in New York, I was wearing 1860's period clothing, and I was cooking on a cast iron wood burning stove. The memory of the incredible heat luckily has faded; the memory of rhubarb's deliciousness has not.

Which is why, since finding this coffee cake recipe on Smitten Kitchen, I have been waiting for rhubarb to hurry up and be in season. The other day, I finally found some at the grocery store and, because I couldn't remember how much was needed for the recipe, bought 1.5 lbs. It turns out that even if I doubled the recipe, I'd only need a pound. Obviously this meant I had to bake a pie too. (I'm told this logic is flawed, but I fail to see why.) In a delightful coincidence, Ms. Humble recently featured a strawberry rhubarb pie in her pie contest - and I had strawberries!


The coffee cake was pretty straightforward to make, if a bit labor intensive in the cleanup department. The only change I made to the recipe was to cut the amount of sugar in the batter in half. The resulting coffee cake was delightfully spicy and rhubarby. 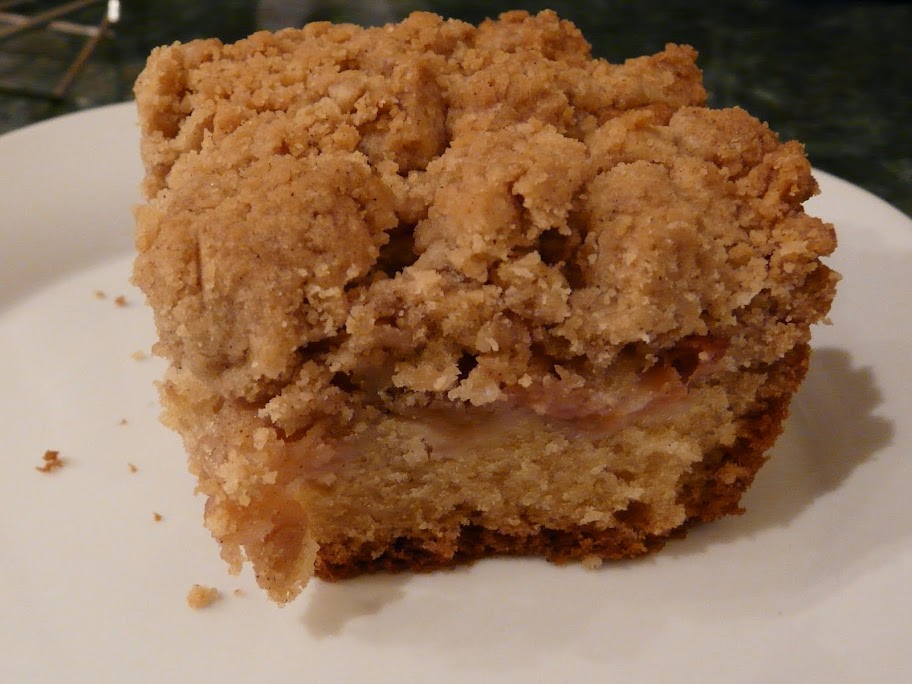 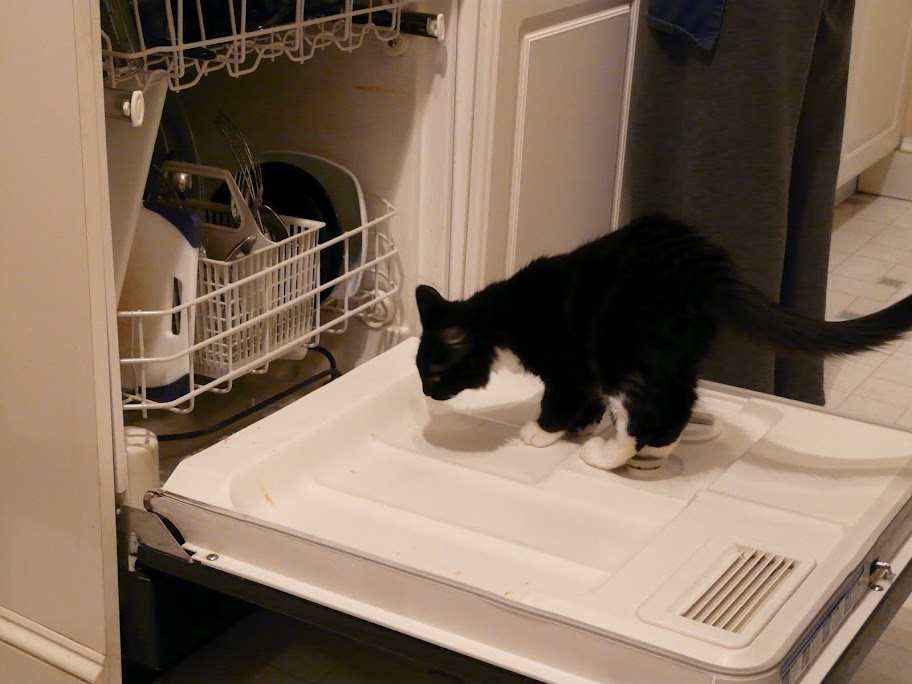 Luckily, I had Melly to help with the cleanup.


The pie was a bit more of an adventure, partially because I'd previously only made pumpkin and apple pies, but mostly because I cannot for the life of me make an attractive pie. They always taste fine, but somewhere between rolling out the crust and baking them, they develop a high degree of wonkitude.


Promise not to laugh? 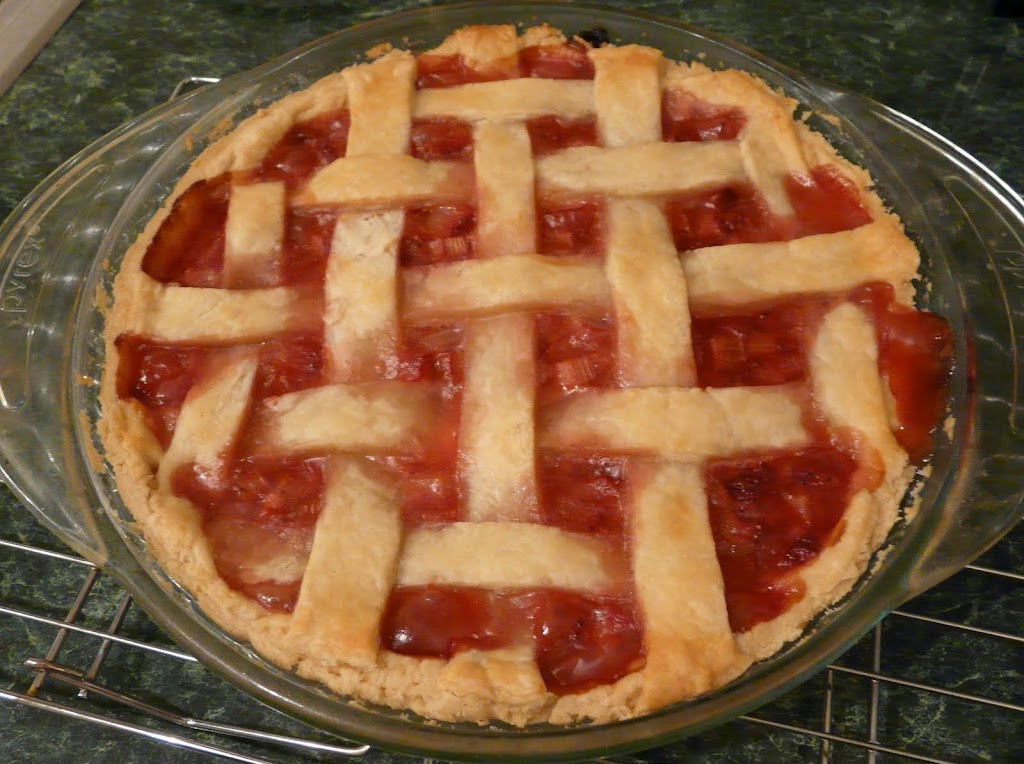 The filling is perfect - sweet from the strawberries, but not at all sugary - but the texture of the crust is unsatisfactory. I think something along the lines of a shortbread tart shell might work better. Or perhaps I should actually refrigerate my dough for half an hour instead of getting impatient and rolling it out after ten minutes. Clearly, I should make more pies and test these theories :)

Edit: The pie photo was taken immediately after the pie came out of the oven. The top crust started soaking up the filling shortly after that, so it got a little soggy. It looked really droopy and unfortunate in person.
Posted by The Adventures of Scarlett and Melly at 10:59 PM

Natalie, thanks for the rhubarb idea! I have my grandmother's original rhubarb plants, and each year, I make all kinds of rhubarb concoctions with no recipes and unpredictable results. My best creation to date has been "straw/blueberry rhubarb crisp" to be served with vanilla ice cream. However, I've yearned for something else. Thanks!

I don't think your pie looks strange. It's probably better than I could do. The rhubarb dessert you made looks great. I have an old recipe for rhubarb bars that is also good--but sadly, that's the only thing I make with my rhubarb. :-)

They both look DELICIOUS to me!!!!!

And that Melly -- she's a good helper!

I love your site because I spend the most time on cat blogs and cooking blogs; this is a great mix of both my favorite pastimes, not to mention, I get to see little Sally Dickens/Melly grow up!

I'm not sure if you're a chocolate person, but if you are, have you tried SK's Cheesecake Marbled Brownies? They are massively dangerously addictive.

Keep up the good work!

Due to some prior unfortunate experiences with rhubarb, I was excited last time when Natalie had to forge on with the coffee cake sans rhubarb. After a delicious, fresh-out-of-the-oven piece last night, I agreed that the rhubarb did, indeed, make it better. I'm further glad that she bestowed upon me a nice big container full of the delicious coffee cake. Time for a fresh pot of coffee and some more of the cake. Mmmmmmm

All of the rhubarb goodness looks and sounds so delicious. Must try. Love your pie. It looks just fine :)

Cynthia: Glad to help! From what I've read about rhubarb, it can be substituted in to just about any berry recipe - you just have to add more sugar. Since I am not a big fan of cooked berries (weird texture, especially blueberries), I intend to experiment with that.

Rene: Thanks! My mom makes the most gorgeous pies, so it's possible I'm holding myself to really high standards.

Annie: So glad you are enjoying the blog! Thanks for letting me know about the SK recipe - I checked it out and it looks amazing. Cheesecake and brownies are two of my favorite desserts, so this one may be particularly dangerous for my waistline. :)

Marlene: Thanks! If you try the recipes, let me know what you think!

mmmmmm, rhubarb! I remember eating it raw with sugar as a kid...eons ago.
Try making your crust with chilled unsalted butter, and vodka instead of water. Srsly! It works. Oh, and you GOTTA chill the dough...
The pie looks tasty indeed!
MomKat Trish

I just love all the pictures of Melly! This blog always makes me smile, so thanks for that.

You really do need to let pie dough rest for best results and you can substitute up to 40% of water in a recipe for vodka in a pie with a prebaked shell. Most of the alcohol burns off and it makes it harder to overwork the dough, so it turns out better.

My Dad has always loved Rhubarb. Unless it has something sweet with it, I am not that interested. Give me a blackberry pie instead please. Nice of you to help Melly.

Well, it still looked good, and tastey, and rhubarb is one of those foods that brings happy childhood memories of picking it from our garden when I was little & helping mom make one of the few things she baked - a rhubarb crisp! : ) So thank you for the memories!