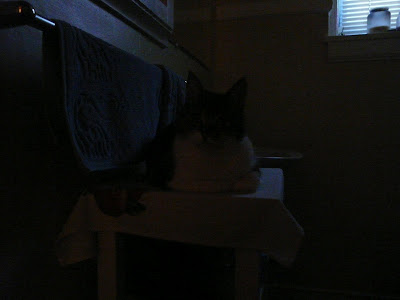 "I'm hiding from Melly. She has artichoke breath." 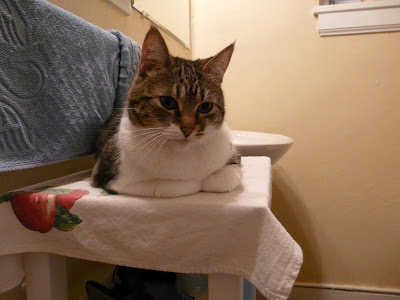 "Drat. Now she can see me."
Posted by The Adventures of Scarlett and Melly at 5:30 PM

Geoff and I were eating artichokes in the living room, and Melly kept trying to steal Geoff's artichoke leaves. Geoff thought she might be discouraged if she were actually to taste some artichoke - he thought she'd hate it. Well... she loved it, and eagerly licked, slurped, and nibbled down an entire leaf. It was pretty ridiculous.

I have had two who like peanut butter, and one who liked tomato sauce. I also count one that LIKES the little bits of chili pepper in my chili garlic sauce. In moderation.

That had to be hilarious watching Melly attacking and eating the artichoke leaf. Nom nom!

I believe garlic is toxic to kitties. I know onions are too. Don't know about chili pepper though.

Cantaloupe seems to be a kitty-oddity favorite. We had two who would dig in the garbage disposal (NOT running at the time!) for the rinds, and once they were even devious enough to roll one off the kitchen counter while we were at work, and proceed to nom-nom-nom away on the somewhat 'sploded fruit.

Other odd kitty favorites (not necessarily shared by the entire population) over the years have included raw beaten eggs, bran muffins, whole wheat bread with a bit of butter, and that yogurt/margarine spread. Oh, and let's not forget Teewurst, a German spreadable sausage that's much finer in texture than Liverwurst (but contains NO liver), and is nice and tangy in flavor.