Geoff and I put the Soft Paws on both kitties last night. We started with Scarlett, assuming that because she submits to nail trims so easily, Soft Paws would be a piece of cake. Well... not so much. She struggled a ton and made a horrible racket (my neighbors probably thought there was a massacre in progress or something). But, of course, 10lbs of cat do not stand a chance against a combined 385lbs of human, and we prevailed. After we were done applying the caps, I gave Scarlett some canned food so I could watch her for a few minutes to make sure that the Soft Paws glue had time to cure and that she didn't eat any off any caps. 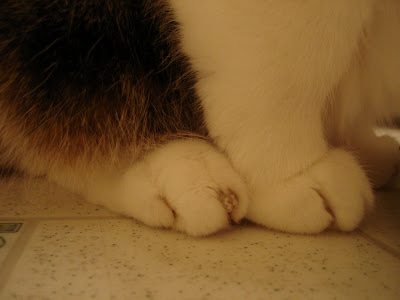 Scarlett did quite a bit of paw grooming after application, and seemed especially annoyed by the caps on her dew claws. In this video you can also see some of the wounds on her chin. The poor thing has several sizeable bald patches that barely have time to scab over before they are reopened - it's heartbreaking. I'm really hoping that they are caused by Melly clawing and not biting, because I'm not sure what I can do about biting.

Melly, despite my fears, was pretty well-behaved during the cap application. She actually purred during the front claw part! Like Scarlett, Melly did a lot of grooming when the process was over (and after I'd observed her for a bit). She managed to get one of the caps off, but it was replaced quickly and without incident. 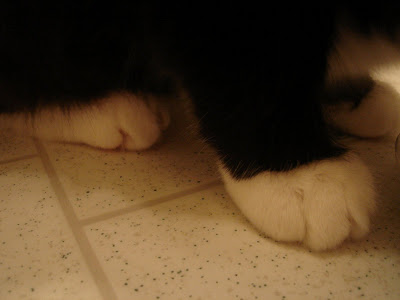 Close-up shot of Melly's paws with caps. I got the clear ones, so they're not too visible. They spread Melly's toes a bit, so her paws look very round and bubble-like, which is kind of cute.

I wasn't able to get a shot of Melly doing the excessive grooming, but here's a video of her chowing down while the glue cures.

My main hope for the Soft Paws is that they keep Melly from drawing too much blood, feline as well as human. Her teeth are pretty hazardous, but if we can keep her to one deadly weapon, I think everyone will be a lot happier.
Posted by The Adventures of Scarlett and Melly at 5:00 PM

Cool! Eddy has been using soft paws pretty much as soon as he was big for them.

I don't know what sequence you used, but I typically trim the nails, then fill the caps, then put them on him. He seems to take it well. We only do the front paws, though I know you have a bunny-kicking issue.

One bit of advice: if either cat "scratches" you with the paws, react as though you hit (spray water, say "bad cat," etc.). I think that, since we failed to, Eddy scratches when he means to tap, and we find out he lost a cap--the hard way.

We stayed to transparent, black, or grey until last year. Right around Christmas (2008), they were offering a red-and-white combo pack. That February, my (and my wife's) alma mater would be celebrating its bicentennial. So, he was decked out in our school colors.

This year, we did something special for St. Patrick's day.

Are you sure that Scarlett's chin is from injury and not from feline acne? From what I could see that looked a bit like it. Any different foods introduced recently, or any use of plastic bowls? For mine it was acne from (really cute/now gone) plastic bowls.

Mr Guilt: Thanks for the advice!

Anne: I did a bit of quick research and that seems possible... Maybe she's reacting to the canned food I've been giving them to ease Melly's digestion. I assumed it was an injury since it started shortly after she and Melly started interacting, and it started as one bloody scab. But you're right, feline acne is a possibility. I'll give the vet a call!

Glad to see everything went (mostly) well. Also happy to know you and Geoff (the boyfriend) were able to use your mass to defeat the notorious Scarlett.

I agree with Anne. I think Scarlett's chin might be a bad case of kitty acne. I've gone through this many times with Tucker, to the point of him getting an infection and huge pustules on his chin. NO plastic bowls. I've found that even metal bowls can cause a reaction.

You might ask your vet about getting some prescription Pyoben. It's a cream you apply once per day or so. Also, wash the area gently every day. I like to use Hibiclens, which is found in near the band-aid section in the pharmacy. It's a gentle anti-microbial cleanser that I've had good luck. with. Email me if you have more questions!