Melly and the Laptop

As you may recall, Melly has a thing for laptops. Here she is snuggling with Geoff's: 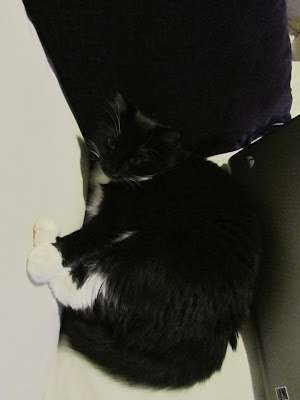 Melly was in a particularly nutty mood yesterday evening and kept jumping onto the back of the kitchen chairs, which would then tip over and scare her half to death. When she was a teeny kitten she could balance pretty easily on the top of the chairs; she doesn't seem to have realized that she is much too big now.

Oh, and also, I baked last night! It's been a while, mostly because I've been feeling uninspired. However, my sister's birthday is approaching and I wanted to send her some tasty treats. I'll post the recipe and a picture or two after she receives the package since I don't want to ruin the surprise :)
Posted by The Adventures of Scarlett and Melly at 7:00 AM

You goofy girl, be careful so you don't hurt yourselfs on the chairs.

Oh Melly, it's that awkward time of getting used to your size. You're a doll!

Melly
My sister Boo likes to sleep right behind the laptop, Mom has made her a nice spot and she is so happy there. It's her own little hidey hole.