A few nights ago, Geoff and I were sitting on the couch watching a movie when I heard Scarlett meowing. It was a throaty merower sound, the one she usually makes when something is wrong. The last time she made it was when she had spectacularly vomited her entire breakfast on the kitchen floor, so I went to investigate.

This is what I found: 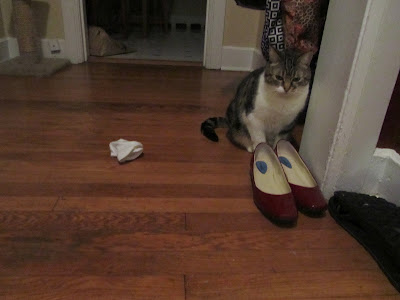 Scarlett had taken one of the two white ankle socks I'd left out to wear to bed and deposited it in the middle of the hallway. Nothing was wrong and she didn't look upset, so I tossed the sock back into the bedroom and rejoined Geoff on the couch. About an hour later, Scarlett meowed again. She had brought the other sock into the hallway and was sitting next to it, looking up at me.

As an experiment, I've been leaving the socks out in the bedroom, and Scarlett has brought them, one at a time, into the hallway three nights in a row now, and while I was at work yesterday, Geoff texted me to report that she'd done it again!

Before I had a laundry basket with a lid, Scarlett used to pull my socks out of the laundry and leave them around the apartment, which I interpreted as a sign of discontent (she'd stop doing it if I got her a new toy or something). Perhaps that's what this is. Or maybe she's just playing. Either way, it's very peculiar.
Posted by The Adventures of Scarlett and Melly at 7:00 AM

My goofballs do this all the time, they love socks, if by chance socks get under my bed, they bring them out for me. I recently bought some fuzzy devil horns for halloween for me and I found those in another room as well. Cats are just silly -- people whoever say they are boring are nuts. You do have adorable kitties.

That is so cute!

If Scarlet is like my little boy, it would be that she is playing. If I am not in the room, my little muffin will grab a toy with his mouth and do that strange meow until I come running over. By the time I get there, the toy is already on the floor and he's sitting there with that same look on his face as Scarlet.

Cats! They never cease to entertain. :)

My Linus does that with his mousies and sparkle balls. That's my cue to play fetch with him. Fun idea in theory, but not so much in practice when it's 2 a.m.

Many years ago, I was staying at my aunt and uncle's, and before I went to bed, I was told, "Don't worry if you hear something odd in the middle of the night -- it's just Laurette making her 'sock noises'." Laurette loved to grab used socks and would make the same kind of weird meow as you described with Scarlett. I've also known cats who make similar noises over raw meat, or a caught mouse.

Oh, Scarlett, you silly girl. Our Tucker caterwauls like that too, only his item of choice is a piece of wrapped peppermint candy. I've never been lucky enough to get a photo of it though.

MOL~!!! She is so silly. Our beloved sisfur, Scooter, used to steal moms bras and panties and have them ALL OVER the apartment. Mom would come home from work and not know whether is was Scooter or Skeeter. Until that ONE day she caught her in the act. It was just "her thing"

My friend's cat loves her used underwear, drags it about the house and sometimes hides them. Boy, was my friend worried when she had people help her move... yes, it can be quite embarrassing, but most entertaining for those of us hearing about it!

Johnson does the same thing with his feather-butt toys, right after we go to bed. we have to take them from him and acknowlege the "gift" to satisfy him. He has THREE of these toys...
*sigh*

Oh boy, I know that noise. The neighbors probably think we're torturing our Siamese, but it's just her loving way of saying "I brought you this toy and IT IS DEAD."

That's wonderful. My socks have a way of disappearing (in the dryer, laundrymat, travelling) and I would love it if my kitty would hunt down some new ones for me.

Socks were a favorite of our Molly. But only my husband's acrylic dress socks. On Sunday afternoons she would hamper dive to retrieve them. When she was younger, she would "attack" them which made them unsuitable for wearing. We got to where we would tie a knot in "her" socks so we could tell them apart from the good socks. She also got the singles. She would carry them around the house meowing to wake the dead. The first time was quite a shock. She would also do the same thing with some sweaters that my husband used to wear that are of a similar weight as the socks. What a shock to see a little cat dragging a whole sweater down the hall and into the living room as she straddled it as it. Each night before bed we would collect all of her socks and put them in a box in the basement and by the next morning there would be a trail of socks up the stairs and throughout the rest of the house. When we were out of town and had a friend feeding the cats, she would tell me that she knew Molly was alive by the trail of socks. Our current cat does the same thing, only with remnants or selveges of fleece fabric.

Virgil used to love socks and woudl play with them - he would bring them for me to throw for him. He has stopped but I think it is because he can't really get to them anymore (now that he is bigger it is tough to get into the spot they are kept). Maybe she just wants to play with you and with them.

My cats have a serious sock problem. Not only do they pull them out of the sock drawer (I had to tape it shut) to play with, but they use them to cover their food. Mishka has now taken to chewing socks, so I've now de-socked the entire house, put all our socks in a locking file cabinet, and threw away the SEVENTEEN socks that were riddled with holes. Little punks.

I suspect that Melly has helped Scarlett get in touch with her inner cat.

Our brood does that with their mousies, you never know where you'll find one.

My cat makes that weird loud meow when she comes in with a mouse in her mouth. It is strangely muffled because mouth is full mouse body:)

Well, that's just adorable. And brought to mind this: http://www.king5.com/news/Glove-Stealing-Cat-98464489.html

And by the way, my Rosie has a terrible fear of socks. Whether on or off the foot. Go figure. Cats are weird.

Well, we never touch socks that have been worn, but The Big Thing noticed he had lost a clean sock one day (there being an odd number of that color).

Then one day one sock of that color appeared on the bed. Sure enough, he had an even number again. He doesnt know who hid it or who retreived it, an WE arent tellin.

However, I will mention that Iza loves ta play fetch with stuff an I dont...

LOL! Like Marlene, one of mine loved used undies. He would work hard to get into the hamper. Once he even went tearing through the house, while company was there, with a triangular flag, grasped firmly in his mouth, flapping wildly behind him! Very funny, even if I was blushing up a storm.

Whenever Annie wants me to come look at something, she does that throaty Merrrwowr. Not underwear connected usually, though!