Thank you all for your healing wishes, advice, and stories of cat-related casualties yesterday! Oh, the things we put up with for our cats, eh?  I was able to see my doctor yesterday, who made sure my tetanus shot was up to date and then put me on antibiotics--better safe than sorry. I have been getting a lot of strange looks at my facial wounds, and after I explain that they're cat scratches, I am inevitably asked, "But WHERE did you encounter such a vicious creature?!" Ha. It's only the cat lovers who nod understandingly when I say that the vicious creature is mine.

Anyway, on to the fun stuff!

As you probably know, Laurie over at The Itty Bitty Kitty Committee is running her annual fundraiser for the Tacoma Humane Society's Dog-a-Thon.  If you have any interest in donating, today is a great day for it because I'm doing a challenge!

The Humane Society does great work for cats, in large part with the funds raised by Laurie, and I like to support them when I can. So, I contacted Laurie over the weekend and asked her if I could do a challenge for her fundraiser. Laurie liked my idea, so I'll be making a fleece kitty bed for every $20 donated through the IBKC FUNdraising page today. (There's a cap, otherwise I'd be making beds until my fingers fell off!)

Laurie asked for pictures of the fleece beds, but because I had neither photos nor a bed available, I quickly made a sample bed with some scrap fleece. When it was done I plopped the kitties down on it for a quick photo shoot.

Scarlett wasn't particularly thrilled to participate, but she held still long enough for me to get a couple shots. 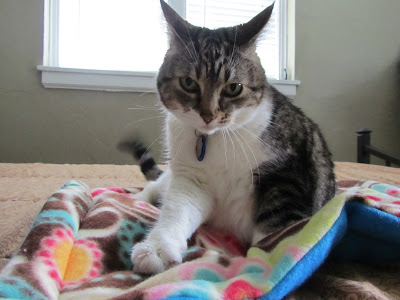 Melly, unsurprisingly, was more than happy to model. I did get some funny outtakes, though, which I'll share later this week. 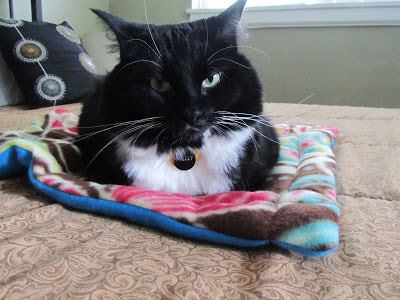 Melly ended up enjoying the kitty bed so much that she stayed on it long after the photo shoot was done. 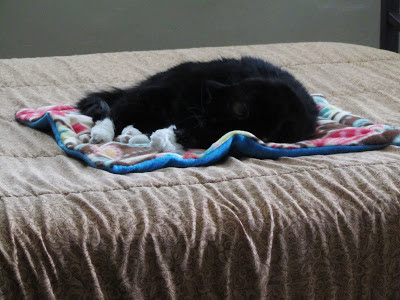 Posted by The Adventures of Scarlett and Melly at 7:00 AM

What a great idea! Hope you have your fleece stash ready. . .

It sounds like today is a perfect day for me to make a donation, then :-)

Quick question--when it's all said and done, can get ahold of these cat beds? My cats would be glad to have a couple ;-)

Wow, what a great challenge! Good thing you have a cap, or you WOULD be sewing for the rest of your life! Thanks for being awesome.

Great idea! Eventually, I will be making kitty beds out of old tshirts... when I find time!

Any chance you could post directions on how you make these, Natalie? They look pretty simple, but it's nice to have the actual dimensions spelled out. I can see myself warming up my sewing machine for shelter kitties very easily!

Update: You inspired us to donate--so you'll have to make another bed because of us!

Yay!! What a wonderful donation!