The New Chair, and some Remodel Photos

One of the pieces of furniture that Josh brought with him is a blue armchair (with ottoman). I love how it looks, but was worried that the textured fabric would be very appealing to cats' claws. I put some blue tape, sticky side out, around the chair in an effort to dissuade the furballs from clawing it. Turns out I needn't have worried; they just want to sit on it.

Melly's preferred spot is the ottoman, so I put one of her beds on it to try and contain the cat hair. Scarlett likes to tuck herself back into the chair, which allows her to be sheltered on three sides and affords her a good view of the living room (and any approaching encroaching tuxies). 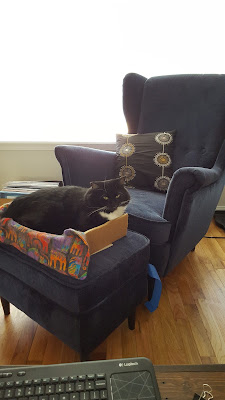 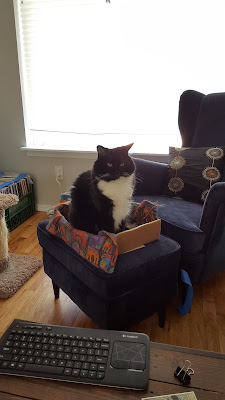 I think you probably got a good idea of the scope of the home remodel from the bathroom pictures, but these shots of the hallway always make me laugh. For some reason early on, it was decided that the cupboard at the end of the hallway could stay; aside from it and the floors, everything was ripped out during the remodel process. We used the cupboard to store tools while we worked, and it's the only place in the whole house where the original sheet rock, with it's odd stucco-like texture, remains. I still haven't put the doors back on... Melly doesn't mind, though. 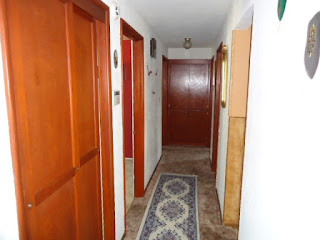 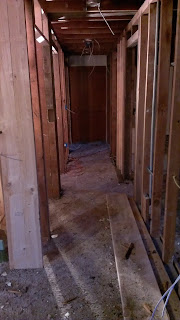 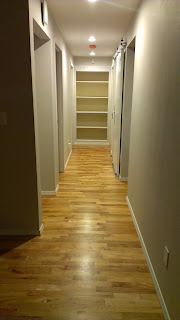 Posted by The Adventures of Scarlett and Melly at 5:00 AM

Thats an impressive change. We would love to explore all the new places and especially the doorless shelfs!

Love Melly in the bed/ottoman. And geez, that remodeling project was sure something!

impressive job with the remodel.. do wish the photos were a bit bigger on your blog..