This last year has been so full of change that I truly didn't realize it's been eight months since my last update. Good gracious.

Well, here's a brief overview of the goings on:

1. The House
After buying it in November, I spent the rest of the month doing demolition and gutting it down to the studs. Through all of December and most of January, we (a revolving crew led by my dad) put in all new everything: plumbing, electric, insulation... plus all of the cosmetic stuff.  It was a massive project, considerably more involved and expensive than I had anticipated. (If you're interested in before and after pictures, let me know--they're almost unbelievable.) I finally moved in at the end of January.  For the first week or so that I was in the house, Geoff kept the cats at his condo. That way, I was able to finish up the painting and get all settled in before they arrived. It worked out great, and they adjusted quickly. 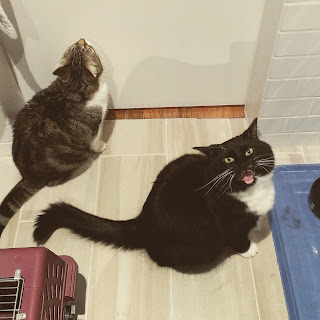 At first, I put the cats in the bathroom, but they wanted out immediately.

2. The New Guy
Despite my generally pragmatic and often pessimistic worldview, I remain an eternal optimist in the romance department. (I often wonder how this appears to people who don't know me well. "Another boyfriend? Really, Natalie?") So, after the last breakup, which was utterly dreadful, I attempted online dating again. Several of the dates were the sort that make for great stories after the fact, but eventually, I met Josh. Even though we met online, he never felt like a stranger, which I partially attribute to two very odd coincidences: our cousins live a block away from each other and went to middle and high school together... in Iowa; and I own his twin sister's hat, which a friend bought for me two years ago. Anyway, I'll spare you the gushing, but I'm very lucky. And he moved in yesterday. 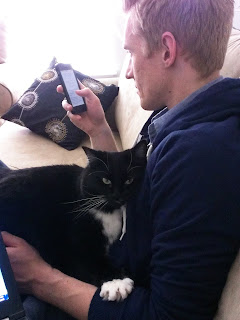 Melly has claimed Josh as her own.

3. The Heat
If you follow me on Instagram (@nerdnat) or Melly on Facebook, you know that it's been very, very hot here in the Northwest this summer. The cats are on a constant quest for the coolest spot, although Scarlett, bless her, always needs to be near me, so her quest is limited to the coolest spot within about a 10' radius of where I am. She has been getting increasingly undignified the hotter it gets, so I have an ever-growing collection of pictures that look like this: 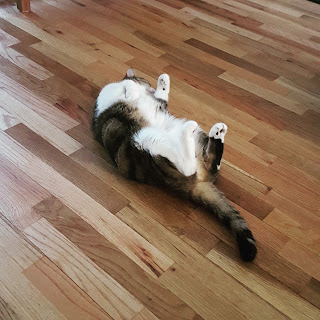 In summary, I hope to post a bit more frequently now that the Giant Life Changes seem to be slowing down!  I miss you all.
Posted by The Adventures of Scarlett and Melly at 1:46 PM

Enjoy the house! My optimism gave out eventually, but that was just me... and my cats always took good care of me!

According to my human, renovating a house takes guts, ambition and a little insanity! The house she and her boyfriend lived in before this one needed a lot of work... and she said NEVER again! Not that this one never needs work - there is always something, and stuff she would like to do too - but at least it was nearly perfect when she moved in. Enjoy your brand new place - I bet the Melly and Scarlett love it!

That sounds like quite a renovation! Best of luck as you go forward.

You have been missed Melly and Scarlet. I hope you'll share the highlights of the renovation.

It's great that you are back! Congrats on everything. We see Melly gives Josh the stamp of approval. :-)

you own his twin sister's hat? wait what??

Excuse me while I think this is all just awesome :) and I'm glad you are blogging again.

catching up on blogs from my favorite people. That first pic of Melly is awesome.

When Sue lays like Scarlett we say "oh, Sue died". Hard to resist the snorgles.