In Memory of Star and Comet

When I was in high school, my little sister and I set our sights on getting a cat. We’d recently moved into a new house, and we decided a pet was needed. Neither of us had any experience with cat ownership, but we figured a cat would be less messy than a dog and our pleading might therefore succeed. Our parents relented and, much to our great delight, we ended up with not one cat, but two: five-month-old litter mates named Star and Comet. 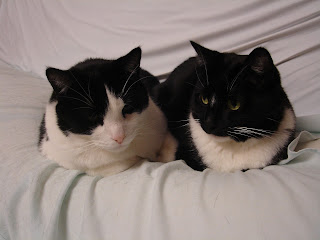 Star turned out to be quite social, smart, and dashing, with sleek fur and perfect tuxedo markings. He was madly in love with my sister, and would beg to be held by her and give her little licks on the chin. He also loved my mother and would carry on mewing, chirping conversations with her and follow her around the house, keeping her company. Star loved to play soccer with marbles on the kitchen floor, and would bat a marble back and forth with any willing human for a half hour or more. He was one of the only cats I knew who actually liked to wear accessories, like a little white shirt collar with an attached tie. When my sister and I lived at home, Star knew our usual school and social routines.  If we were out later than he expected, Star would meow loudly at our bedroom doors as if to ask our parents, "where are they?!" 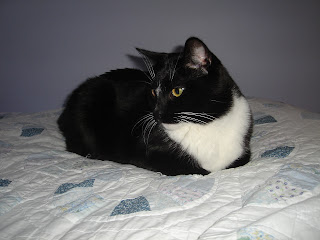 Comet... well, we joked that these two were the George and Lenny of cats (from Steinbeck's Of Mice and Men). Comet always had slightly mussed fur, and he was huge – not fat, at least when he was young, just large – and he didn't seem to be terribly bright. He was easily startled, and spent much of his time hiding in the most remote corner of the house he could find. If the house was quiet, though, he liked to sit on my lap and purr while I did homework. Every time I visited my parents after I moved out, Comet would seek me out and insist on being held and cuddled. 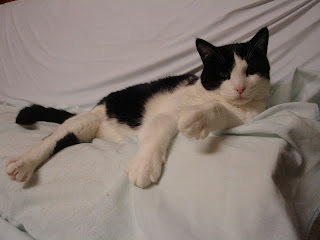 Comet passed away in April 2010 after a short illness. Star died very suddenly in February 2011. They are dearly missed. 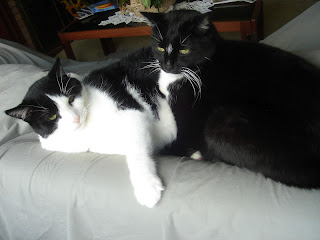