Likes: Chicken, treats, snuggling, attacking Scarlett's tail,  playing with the giant feather wand, napping on her back, sitting in the bathtub, sitting on the side of the tub while people shower
Dislikes: Being confined to the bathroom, having her claws trimmed, having her teeth brushed, not getting enough attention, baths 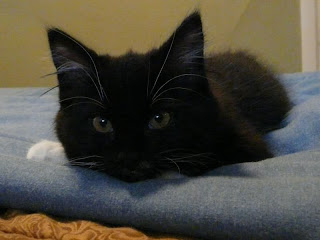 Melly's Story: I followed Melly (formerly Sally Dickens) on Pitter Pats of Baby Cats, and, like everyone else, thought she was just the cutest darn thing.  When Sue posted that Melly had been made available for adoption but that there hadn't been any interest, I thought maybe, just maybe, Melly could be mine.  So I met Sue at the Humane Society the next day and ended up taking the lovely Miss Melly home with me.  The adjustment was a lot more difficult than I expected, and I felt so guilty for causing such trauma to both Scarlett and Melly.  As a result, it looked for a while like I might be returning Melly to the Humane Society.  But things calmed down, Scarlett's tail un-poofed, and Melly stayed.
And now, I really can't imagine life without Melly.  She is so ridiculous and silly, and has such an affectionate disposition.  Her antics and snuggles bring a lot of laughter and cheer to my home.  And while she and Scarlett don't always get along (this may have something to do with Scarlett having a delightfully swishy tail that is very inviting to pounces), I think they are glad for each other's company. 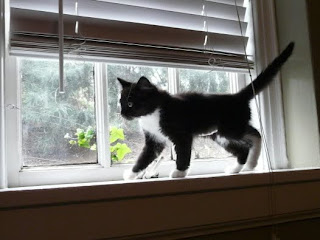